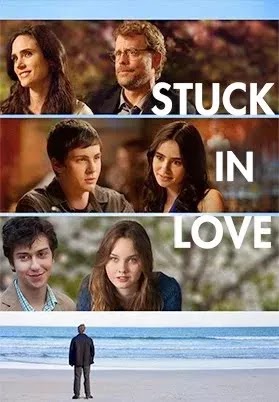 This film spends a year with the Borgens family, beginning on Thanksgiving, and ending on Thanksgiving a year later. The father, William Borgens (Greg Kinnear) is a well known writer, who pines for his ex-wife (Jennifer Connelly), even to the point of spying on her and her new boyfriend. As a result of his lonely heart he hasn't been writing lately, but he does continue to encourage his kids to write. Apparently there is some truth to the old adage that the apples don't fall too far from the apple tree. Or could it be simply because he pays them if they write?

The son, Rusty (Nat Wolff), clearly has some talent for writing but we never truly get the sense that he is driven to do so other than to make the money his father has promised. Rusty likes a girl named Kate (Liana Liberato) at his high school who is already taken, but that doesn't stop him from writing a poem about her that he is forced to read out loud in class. If this sounds a bit cliche, and contrived I assure you it feels that way in the film as well Worse yet, the girl tracks him down somehow knowing instinctively that it was for her. 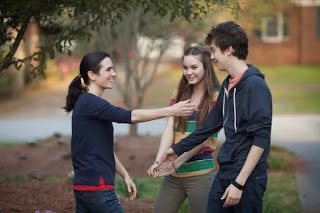 In the beginning of the film, words come on the screen as if typed on a typewriter when characters speak in voice-over or out loud. It's a fitting artistic choice for a story about a family of writers. I almost wish this stylistic approach had continued throughout the film, but it's only used to intro the members of that family.

Sam (Lilly Collins) the older daughter is having her first book published. She speaks with Rusty about how she tries to avoid love at all costs. She describes the difference between a realist and a hopeless romantic, she believes herself a realist and encourages Rusty to avoid love as well. Her opinion, obviously formed from having watched her parents split apart. She very clearly holds a grudge against her mom, it's the most broken of the relationships in this film. 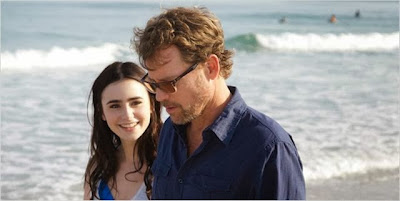 William, however, seems to have a good relationship with both his son and his daughter, and even maintains some form of friendship with his ex-wife.  He also  gives Rusty some advice most parents won't. He sits him down and tells Rusty he is afraid he isn't having enough experiences. He warns him that sweet sensitive guys don't have fun or interesting life experiences, and end up regretting letting their young lives pass by them.

Often its not necessarily the things we've done that we regret, but the things we haven't done. Having the courage to do things and have experiences or create memories is not always easy for everyone, but it's better to start young, and this is what William wants for his son, because after all, "A writer is the sum of their experiences," he tells him.

Feeling courageous after this discussion, Rusty goes to a party to find Kate having a fight with her boyfriend. As she tries to leave, he pushes her, and Rusty steps in to save the day, in a manner of speaking. This being the obvious catalyst that will give him his "shot" with Kate. She's an adventurous person who can help break Rusty out of his shell, and she makes him feel more courageous. She also clearly needs him. She has a drug problem and has been in abusive relationships. He can be a positive influence in her life.

William has a somewhat strange, "friends with benefits" relationship with Tricia (Kristen Bell), the woman who lives just down the beach. They aren't emotionally involved what-so-ever. She is married, and knows that he loves his ex-wife. She encourages him to remarry, and helps him with his online dating profile. It's a strange sort of relationship. She is a friend that cares more about helping him find love again than continuing the "benefits" portion of their relationship. But then again, it seems as though their "relationship" could have been going on since before his divorce, it could continue no matter what happens in his dating life. 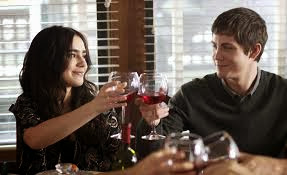 Louis (Logan Lerman), a fellow classmate of Sam, keeps running into her at bars and tries to challenge her every belief and life style choice. She immediately pegs him as the hopeless romantic type, and tries to avoid having anything to do with him. He seems hopelessly in love with her right away, and forces his way into her life, by taking her jacket and going to a coffee shop in order to get her to go with him. Once she finds they have some things in common, she tries to run away out of fear that she might actually fall for Louis. But feelings being what they are tend to come on strong and break down Sam's will power.

She has clearly taken after her father in more ways than one, because once it's clear that she likes him too, we see her sneak around, following him to his mother's house. It's here that she sees him reading to his sick mother, and immediately her heart melts. The transformation from a strong willed woman whose personal motto is "avoid love at all costs," to girl with a crush willing to stalk and immediately accept dates when offered, is a little fast, but I guess you only have so much time in a film.

William goes on his first date in a long time, with the help of Tricia. After the date he returns to his ex-wife's house to return the wedding ring he doesn't believe he should have anymore, but catches her reading his book. It's a sign to him that she may not be out of reach.

This may be one of the rare films where the break up of the family has the dad playing good guy, while the mom is not well liked. But these are all flawed characters, but as characters in this type of film tend to, they start off the film seeming more flawed than they are by films end. The mother/daughter relationship is the one that clearly needs the most fixing, and we want to see Rusty's relationship work out too.

I mentioned before that Kate has a drug problem, and at the Borgens' family party, thrown in celebration of Sam's new book, she is given alcohol by mistake. Shortly after, she goes missing. Tracking her down becomes a family affair, and the first thing they all do together in a long time. Even though things are messed up at least they are all together. It's a case of things having to get worse before they get better.

Louis' mother dies, and Sam goes to comfort him. Experiencing loss with Louis is enough to convince her that she should make up with her mother. Perhaps it's a tad too contrived, but sometimes in life you meet the right people at just the right time.

Having mended all the relationships the family can start spending time together again as a whole, and of course this gives us the sense that the parents may have a second chance.

It's an ok film about a broken family looking for love individually, and ultimately gathering for the holidays and finding it together. As you can tell from several points in this post, this film is a tad cliche and contrived, but it has its moments. The acting is solid throughout, but sadly I felt as though the characters weren't developed that much. We got tidbits of the past that caused their current situation, but I never felt like I knew the mother well enough to care about her.