One of the joys of going to see a new Disney/Pixar film in theaters (aside from the film itself) is to catch the new short film that plays just before it.  Often these are highly entertaining and offer some of Pixar's best work in small doses.

It harkens back to a time when animated shorts played in theaters before feature films.  I grew up watching Looney Tunes on TV, but in their early years Looney Tunes were just a series of animated short films that played in theaters before feature films.  Film goers would be treated to a short film and a news reel before the feature played.

Walt Disney also had his series of short animated films that played in theaters, but in more modern times these have gone away. Disney/Pixar are bringing this tradition back even if only with their own film releases.  Every Pixar film since their second (ABug's Life) has had a short film play before it.

But how can you track these down after you leave the theater? There are many ways. They are usually packaged with the film they accompanied as a special feature of the DVD/Blu-ray release, and for the few that are tied specifically to feature films it would make more sense to get these on the DVD release of the feature film itself (those that feature characters in an additional scene for the feature film, such as the BURN-E short film that adds additional content to WALL-E, or Jack Jack Attack adding an additional scene to The Incredibles, just to name a few).  But as for the rest you can buy these as stand alone shorts on Amazon Instant Video or Google Play.


The Pixar shorts are available to purchase for $1.99 (SD) or 2.99 (HD) on both Google Play and Amazon Instant Video. So if you're looking to build your digital library, these are excellent short films and for less than you may pay for some mobile apps, or a cup of coffee from Starbucks (the desert kind mind you...).

The nice thing about building your digital library with Google Play is that you can stream them on your TV using Chromecast (or of course download locally to your phone or tablet).  So far Amazon has withheld their Amazon Prime/Instant Video app from Android and subsequently Chromecast, which strikes me as odd considering their own proprietary tablets (the Kindle Fire line) has access to Amazon Prime/Instant Video and the Kindle Fire's operating system is a version of Android.  Perhaps they are being stingy because of competition with Google's own Nexus line of tablets, but this is all something for another post I suppose.  I should mention, however, Amazon does have apps available on gaming consoles and Blu-ray disc players, which gives you another way to access your library.

Owning them on the digital cloud has it's benefits. For instance I can watch my library at home or on the go, but I can also go visit my family and we can watch movies on their TV via Chromecast and I didn't have to remember to bring anything extra with me.

However, if digital copies aren't your thing you can buy DVD collections of these shorts. There are currently two volumes available.

My personal favorites are La Luna, Presto and Partly Cloudy.  You may remember La Luna playing in theaters before Brave a few years ago. To me it was the best part about that particular theater going experience, see my post about why I didn't like Brave here.

The most recent one is The Blue Umbrella. It was released over the summer and played before Monster's University.  Go check them out. 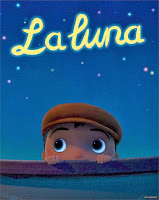 Presto (2008)
Directed by:
Runtime:
Released theatrically before WALL-E (2008)
Posted by Zach Owens
Email ThisBlogThis!Share to TwitterShare to FacebookShare to Pinterest