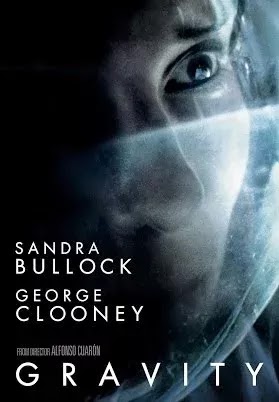 Normally I don't really like 3D, but this is one of those rare cases where to see it in 2D would be a lesser experience.  This is a film that took me in from the opening sequence and didn't let go, and I can only imagine what the immersion would have been like on an even larger screen.  See it on Imax if you can.

Cuaron, known for his long tracking shots in his 2009 film Children of Men, begins Gravity with another very long shot. I was slightly in awe as I watched the shot continue and realized the opening scene hadn't cut since the film opened. The camera moves from wide shots showing the vastness of space and moves in close, even inside of Stone's helmet, to give us her point of view without cutting. From the muted sounds to the beautiful cinematography and special effects, no other film gives the same immersive sense of being in space with the characters than this film.

This film is a disaster/survival film set in space, where Stone goes from one dangerous mess to another. It's possible to scrutinize and complain about scientific inaccuracies in order to tear this film down, but if you want to be "that guy," then I'm afraid you're missing out, and probably went into this "movie" knowing it was set in space, and were ready to tear it apart from the start. 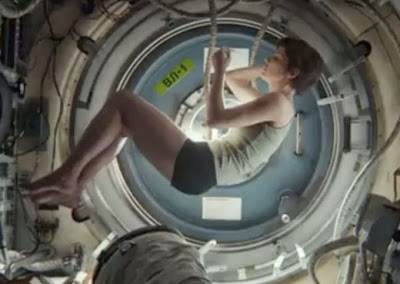 If you are willing to see it, this is a story of rebirth.  Stone had lost her daughter, she was alone and in space. A collision with debris from another satellite sends her adrift, and kills the rest of her team. Kowalski (George Clooney) survives as well, and fortunately has fuel in his pack to track down Stone and bring her back to the wreckage.

If there was any doubt this story of rebirth, Cuaron gives us a very deliberate shot. When she finally makes it back inside we are given a long shot while Stone takes her suit off and begins floating in the fetal position as if sleeping. There is also a scene in which Stone struggles to get to her feet as if taking her first steps.

The film's shortcoming is that there is admittedly not much in the way of character development or story, we get small bits of Stone's backstory, but the film is content to carry on at a quick pace taking us from one life threatening situation to the next. Seeing this film is an experience that demands a large immersive screen. 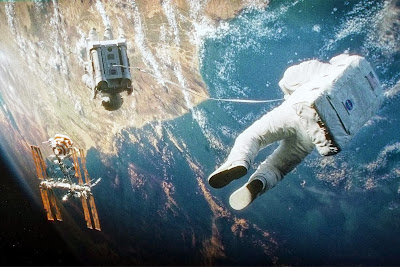 Some of the most intense sequences are when Stone is out in space working while the "monster" of the film silently sneaks its way up on her. The scenes where debris (that torments her a couple of times throughout the film) tears through the station around her make some of the best use of 3D (even if it's unlikely that she'd encounter the same debris field more than once).

It isn't as though it's a complex film, or even that you won't necessarily be able to guess what will happen in the film before seeing it, it's the spectacle and how well it's all done that make it a must see. It is one of the best movies I've seen so far this year, and is definitely worth the extra money to see in 3D.
Posted by Zach Owens
Email ThisBlogThis!Share to TwitterShare to FacebookShare to Pinterest
Labels: 2013, 4, action, sci-fi, space, tense, thriller