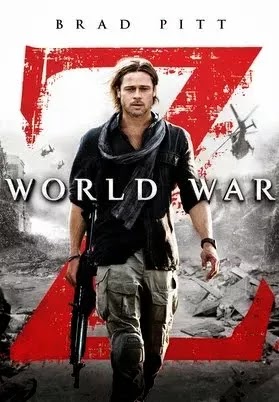 You'll remember in 2008 Marc Forster tried his hand at the Bond franchise with Quantum of Solace, and brought a quick cutting, shaky-cam style, that some either love or hate (I'm not very fond of the style personally). The film also, unfortunately suffered from a lacking attention to detail. For the most part World War Z suffers from the same set of problems.

Initially when I left the theater I thought at least it was enjoyable, but then when I thought about how I would compare it to other zombie flicks I'm afraid it doesn't set itself apart, nor does it necessarily excel at what it tries to do.

The trailer was somewhat confusing. If you didn't already know of the book, you might not even know that it was a movie about zombies. It's almost as if they went out of their way to avoid saying "zombies," or for that matter showing them on screen. From this we can possibly assume that they were trying to bring in a wider audience, fearing that advertising it upfront as a zombie film would turn many away, whereas advertising it as a summer blockbuster about a mysterious disaster starring Brad Pitt could bring in better box office numbers.

All of this aside, World War Z is an example of a movie that can be entertaining without being very good. As I mentioned before, at times it's like most other zombie films, without being as good. Perhaps its main fault is that it's PG-13 (again we can blame the filmmakers for wanting a larger audience rather than a good film) and as a result we miss out on all the gross gory violence you'd expect in a film like this. Even a cable show like The Walking Dead is far more gruesome than this film. I'm not sure telling people, "it's the tamest zombie film you'll ever see" is much of a selling point, especially to those who really enjoy the genre. So then you'd ask, is it like Jaws where the power of suggestion and the unknown frightens us? Well no. As a matter of fact they show us quite early and often what we are supposed to fear (despite what the trailers might suggest). 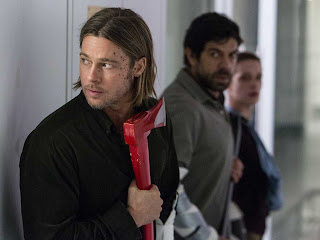 Despite all of this, the story has some decent ideas, and perhaps the book is much better, but I haven't read it and have no plans to in the near future. As I understand it, the book's full title is "World War Z: An Oral History of the Zombie War," but there is no narration, nobody telling us the story from afar, and this is clearly a missed opportunity, when you consider that we haven't really seen this approach to telling a zombie story. There should also be something of a war going on, but there isn't really, but I guess "Zombie Disaster Movie" doesn't have the same ring to it. The title suggest a better film/story than the one we get.

There was clearly a big budget for this film. There is lots of CG, almost too much. They animate most of the zombies when they probably didn't need to. Other zombie films/TV shows manage to pull off gross and terrifying zombies without the overuse of CG. There is also lots of open city shots, action sequences with helicopters and planes, and yet all the films best moments are in the smaller more intimate moments where they wouldn't have needed a big budget. I'm sure these smaller, scarier, more intense moments were told in slower detail in the book, but most of the time the movie rushes through them leaving some of them so quickly you'll wonder why it was there in the first place. For instance, Brad Pitt's character gets out to the roof and is afraid he will turn because he got blood in his mouth from one of the zombies. He stands on the ledge of the building waiting to see if he will start to turn, and if he does he will throw himself off the ledge in order to end his suffering as well as protect his family from what he would become. This could have been a more tense moment, but it breezes past it in seconds. This film is too busy trying to be a big budget summer blockbuster with big action and special effects that it lost sight of the smaller moments. 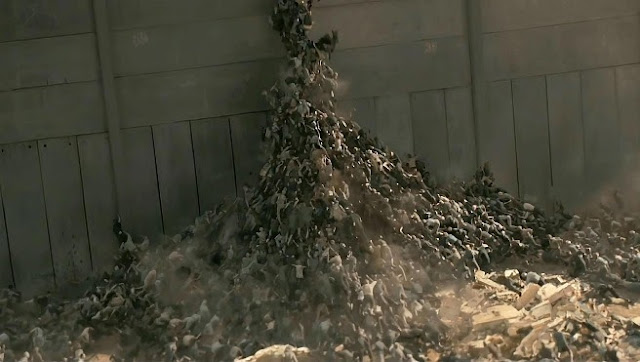 For this and other reasons, I felt as though this film lacks any passion. We sadly don't really get to know or care about the characters much throughout the film. I couldn't really tell you who Brad Pitt was in this movie. He used to work for the UN, but now he's just a family man. Some important people somewhere decide he is worth saving so they pick him and his family up. Is he supposed to be really smart? Really knowledgeable with military tactics? A doctor? A scientist? I'm not sure he's any of these things. So it would appear that they picked him up only for the fact that strange things tend to happen around him. Call it luck or chance, but clearly things happen when he gets involved, most of them bad. They want Gerry (Brad Pitt) to assist and escort some young genius to try to figure out how to cure this "whatever it is." When they land at their first destination the young genius almost immediately dies. In Israel, it turns out they were the only ones in the world prepared for this turn of events, they built a great wall and a "safe city" hides inside. Gerry goes to see what they know and what they are doing that no one else is, and shortly after arriving all the zombies pile on top of each other like a ladder to scale the wall. What are the chances that he could be there right at that moment? Perhaps he takes bad luck wherever he goes.

The first half of the film is a rush through the standard zombie survival scenario, and the second half gets a little bit better, but the bottom line is there are better zombie films out there like 28 Days Later, better zombie TV shows like The Walking Dead, and better zombie comedies like Shaun of the Dead and Zombieland.
Posted by Zach Owens
Email ThisBlogThis!Share to TwitterShare to FacebookShare to Pinterest
Labels: 2, 2013, action, based on a novel, thriller, zombies