The Myth of the American Sleepover (2010) 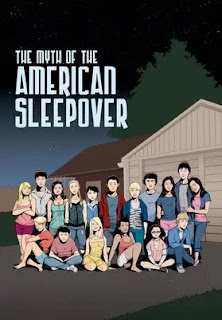 At the risk of sounding nerdy and sentimental at the same time, I'll admit that when growing up I had a tradition of watching a certain movie(s) at the end of the school year as a lead into summer. It just so happened to take place right at the end of the school year and during summer vacation so it always felt appropriate. The Myth of the American Sleepover could have been that movie to watch as the summer was drawing to a close and the uncertainty of the upcoming school year loomed.

This film takes place on the last weekend of summer just before the school year begins again, reminding us how important summer is when you are young. It's freedom, and I distinctly remember dreading the start of the school year because it meant freedom that was gone.

It's about a bunch of different young people having coming of age experiences. Some will be heading off to college, some are just starting high school, and most of the rest are dreading the start of yet another year. There is something to be said when you can pull off this type of story with an ensemble cast when so many other filmmakers would have had their hands full with just one central character.

I'm told it takes place in Detroit, but it may as well be anywhere. We have no clues as to the time it takes place either. There are no cell phones or computers present, or other era identifying markers to put a time frame on it.  Clearly this is meant to have taken place anywhere and at any time, which will likely lend it a certain timeless quality. 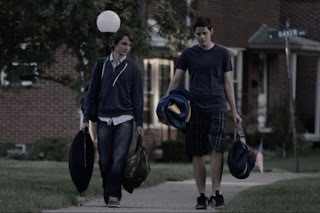 As the title suggests it involves sleepovers, and parties, and people ditching this one to go to that one and ending up at a completely different one. I'll note that so many parents being out of town on the same weekend seems a little unlikely, but that is neither here nor there.


In A Nutshell:
Maggie is on the lookout for whatever adventure she might find before the end of summer. Claudia is new in town and trying to get a head start on friend making before the school year starts. Rob is a bit obsessed with an attractive girl he saw at the supermarket and won't rest till he finds her. Scott, a college dropout, seeks out his twin friends from high school after a photo and a yearbook bring out some nostalgic feelings.  One way or another everyone seems desperate for a new start and/or one last love affair before school starts again.

The opening scene with Maggie sums up the reason for all the parties and sleepovers. Everyone wishes they'd done more with their summer, their 3 months of freedom.

Another scene with Maggie and her potential love interest, sums up why this type of film can still be enjoyable despite your age. Either you are around their age so you identify all too well with them or you're like Maggie's love interest who used to enjoy sleepovers, and kinda misses them now that he feels "too old to do them anymore."  He talks about missing being able to do the things you get to do when you're a kid (even though he is still a kid himself).

Parts of this are clearly written by a nostalgic adult for a kid to say, and yet it doesn't make it any less identifiable. With young people there is always that rush to grow up. How many will find themselves grown up and wishing to be young again. That's what the title is all about.  When we are older we realize we missed, or let the moments pass us by. The youthful adventure and fun teenage years is a myth.  It can be painful to live through at the time, we only realize it was a fun memorable time when we are older.

It's like that line from The Office, "I wish there was a way to know you are in the good ol' days before you've actually left them."


Conclusion:
The film captures that time in our lives that we look back on sentimentally even if we didn't necessarily enjoy living through it at the time.

It's not a great film by any means, but it can be enjoyable. Being an indie film, and one focusing on youth, it will undoubtedly find success with a select crowd. It's been described as, "awkward teenagers doing awkward things the way awkward teenagers actually do." As such, there is a certain feeling of authenticity to it, at least more than you're likely to find in bigger Hollywood productions attempting to cover similar ground. Unfortunately it also means you'll have to stick it out through some scenes with some awkward acting too. If you can make it through, you might just find an enjoyable experience

See Also:
It's Kind of a Funny Story
The Perks of Being a Wallflower
Submarine - Netflix
Rushmore
American Graffiti
Posted by Zach Owens
Email ThisBlogThis!Share to TwitterShare to FacebookShare to Pinterest
Labels: coming of age, drama, independent