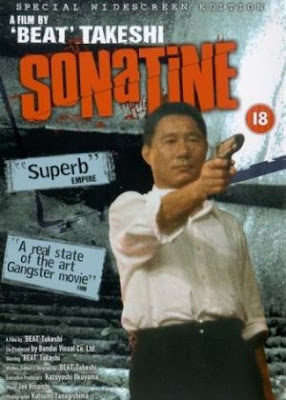 Sonatine was released in 1993, but didn't make it over to American till 1998.  It was directed by Takeshi Kitano, who you might remember as the bad teacher from Battle Royale.  Kitano is an actor, a comedian, and a brilliant director.  He is perhaps best known for his Yakuza films, but his immense talent is not limited to one genre.  Whether he is making comedies, like the hit game show Takeshi's Castle (better known in the US as MXC), or family friendly films like Kikujiro, or Period Pieces like Zatoichi, or Gangster flicks like Sonatine, Brother, or Outrage, I have yet to see something from him that I haven't enjoyed.  Having said that, I feel I should recommend something, and perhaps a gangster flick is as good a place as any to start.

There is fighting between the Anan clan and the Nakamatsu clan. The Big Boss wants to send Murakawa and his clan to Okinawa to settle things down and make peace between them.

Murakawa (Takeshi Kitano) earned his own turf at the cost of several of his men's lives. Now they want to send him out like an errand boy to make peace between two lesser groups.  The Big Boss and his men can't be bothered to deal with a small local issue, so they want Murakawa do deal with it.

Murakawa admits to one of his top men that he is thinking of retiring. He has been a part of the business for too long and wants a simpler life.  He is tired of the bosses risking his life for their purposes. He now has his own turf so he no longer feels the need to go out putting his life in danger to deal with someone else's issues.  From the beginning he seems to be a man who knows that if he does this job he is destined to die, but he has made his peace with it, and takes on the task anyway.

The characters in this film (especially Kitano's character) have a certain Wes Anderson-like blank, absent look about them. They all appear to be deep in thought over some pressing issue, and are all afraid to show any emotion. Considering their position, working with a Yakuza boss, and the fact that all have killed and may be killed at any moment, this is not a complaint about the acting, as much as an observation that, much like Wes Anderson's characters (but in very different ways), these are troubled characters all with something going on deep inside them that they fear to let surface.  This vacant expression has become a trademark for Takeshi Kitano, and, unlike Wes Anderson's characters who are dealing with a different kind of inner turmoil, this gives Kitano's characters a menacing look/characteristic. 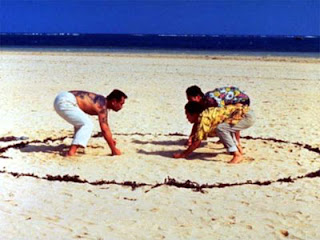 Once they arrive, Murakawa and his clan are almost immediately attacked, which leads to all out war between the other two clans. Having no desire to take part in this war, and as more people die, Murakawa decide to take his people out of town to a cabin on the beach where they can lay low.  This is actually the most entertaining portion of the film. It's where the film turns to light-hearted comedy as the group spends their time relaxing, and playing games while passing time hoping for the war to blow over.

This change in tone allows us to learn more about Murakawa. He admits that while he was in high school he killed his own father. He has grown up a killer working for the Yakuza. He has never known peace. Knowing this gives these scenes on the beach much more meaning. Murakawa becomes very childlike, playing jokes on his friends and allowing himself to laugh and enjoy himself. It is likely the first time in a long time, and maybe the only time in his life he has been happy.

How do you show a group of people trying relax and get away from their troubled past? What would criminals hiding from their past life do? Kitano takes this opportunity to put together some fun scenes that are almost like music videos, where he can play and experiment creatively and visually. These scenes set to Joe Hisaishi's beautiful score (Hisaishi is famous for his work on several other Kitano films, as well as his work on many of Hayao Miyazaki's family friendly animated films) together with beautiful cinematography and the beautiful beaches of Okinawa lend a dreamlike quality to the film. 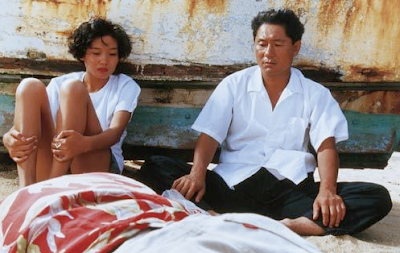 The bosses meet up again and offer a peace treaty with the Anan clan, but on the condition that they banish the Murakawa clan and disband the Nakamatsu clan. After that meeting an assassin shows up and kills several members of both clans. This turns out to be the motivation Murakawa needs to leave the beach and finish things once and for all.

Kitano utilizes a minimalist style throughout the film rather than hollywood-esque over the top action. Murakawa mentions that it isn't that he is not afraid to die, it's that at some point a person gets so scared they almost want to die, which in turn makes you appear fearless.  For Murakawa it was never ending, he wanted to retire, but there was only one way out.

Considering its slow pace and minimalist style it feels like there is a lot to it, but it's a relatively short runtime at just around an hour and a half.  It's an enjoyable film and one of Kitano's best.
Posted by Zach Owens
Email ThisBlogThis!Share to TwitterShare to FacebookShare to Pinterest
Labels: 1993, 4, action, comedy, crime, Japan, Yazuka