South of the Border, West of the Sun 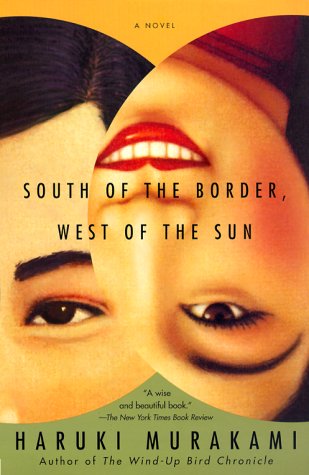 A rare book review for today....

I've always enjoyed Murakami's writing, so when I found this book for cheap I had to pick it up. It's on the shorter side so it's pretty quick to get through.

The story follows the life of Hajime. Like any of Murakami's protagonists, Hajime is the calm, cool, collected, passive, everyman who just so happens to be going through some strange and difficult times.

It begins with him as a child. He is an only child, and befriends another only child in Shimamoto. She has polio, and as a result tends to drag one leg behind her as she walks. Instead of playing outside the way most kids do, they enjoy hanging out inside talking and listening to music.  They love one another, but being so young have no idea how to act on such emotions.

As we know, when we are young, a year or two brings many changes. When they move on to high school (they go to different high schools) they become separated and for whatever reason stop hanging out. Hajime begins his first relationship with a girl from his high school named Izumi, and eventually breaks up with her. He grows up, finds a wife, has children and starts a business in Aoyama (a trendy part of Tokyo known for it's shopping and restaurants).

He has become quite successful. He has a good life and essentially everything he could want, but even after all of this he can't shake the feeling there is something missing. He still has fond memories of his first love Shimamoto. Eventually she comes back into his life. She shows up when it rains, visits with him for a short time, and like the rain leaves for an indeterminate amount of time till it shows up again.

They have their own relationship and talk about leaving it all behind to create themselves anew together. He explains that he never seem to be satisfied and always feels the need to reinvent himself, and he thinks this is a way to do it. Perhaps a life with Shimamoto should have been what he had from the start.  She warns him that there is no middle ground with her, no objects exist in the middle ground. When she leaves even things he thought she had given him seem to disappear.

It's the idea that memory is such a powerful thing. The memory of a first love that never really fades away. It's also the idea that love lost can leave a someone a mere shell of a person.

Just as Izumi had died inside after Hajime left her, the memories of Shimamoto were endangering Hajime's existence.  Izumi had become a shell of a person walking though her life an expressionless zombie.  Hajime said he could feel death coming for him while driving with Shimamoto. After she left he sees the world in black and white, and he is in a constant state of pain. It's as if a vacuum is sucking his life force out of his body.

This is just one possible interpretation...

When we are young we all have different ideas of who we are and what we will become when we grow up. Some of us, even when we get older, can't escape the feeling that something is missing in our lives. Fond childhood memories stay with us our entire lives. We all tend to be in a constant quest for meaning in our lives, and Hajime thinks being with Shimamoto will fulfill that need in his life, but we get the sense that it would kill him either on the inside or outside.

It's no mere coincidence that Shimamoto tends to show up only with the rain. She is like the falling rain, here for a while and then gone again, and when it's gone it leaves no trace behind. As much as he may want to hold onto her, she is a memory, she isn't a solid thing to hold onto, like trying to grab a hold of water in your hand.

She probably died of polio when she was still fairly young, and the only real way to reunite with her would be for Hajime to die as well.

The difference is that, unlike Izumi, Hajime has hope. He has a loving family and a good job. It is left up in the air, and is certainly open to interpretation, but he could end up a shell like Izumi, but when the darkness starts to creep up on him, his family is there to put a hand on his shoulder to bring him out of it. They keep him alive.

It similar territory to his other work Norwegian Wood. The idea that someone could be hurt so badly that they cannot be saved, damaged emotionally beyond repair. Both stories are up for interpretation, but I think he leaves both Toru and Hajime the possibility of living on.
Posted by Zach Owens
Email ThisBlogThis!Share to TwitterShare to FacebookShare to Pinterest
Labels: Book review, Japan