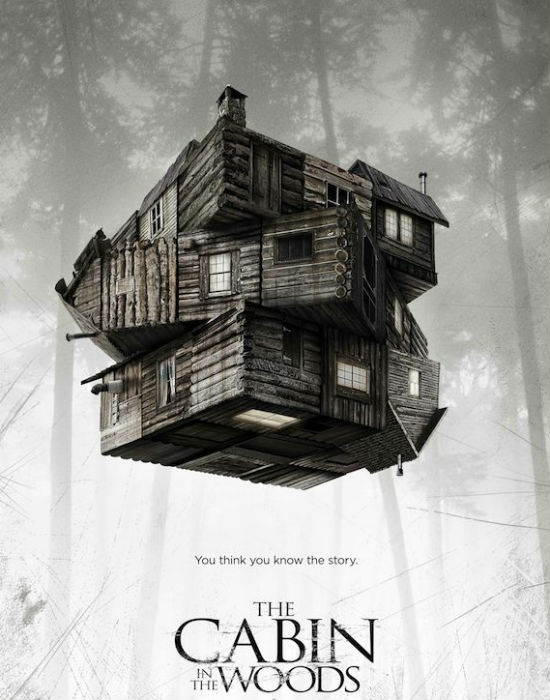 
The Cabin In The Woods was written by Drew Goddard (who also directed) and Joss Whedon who directed the much lauded Avengers film from last year.

This is a film I missed over the last year or two. I have recently been trying to catch up on the big films of the last two years that I haven't seen and when I saw this one pop up on Netflix I had to give it a shot.

I vaguely remember seeing a trailer for this film and immediately writing it off and just another "one of those films." The kind where a group of young adults (all character archetypes: the athlete, the intellectual, the druggy, the slut, and the good kid) all go on some sort of vacation together and it all looks fun for a while then of course the music gets creepy, and fast cutting, screams, and blood enter the picture. 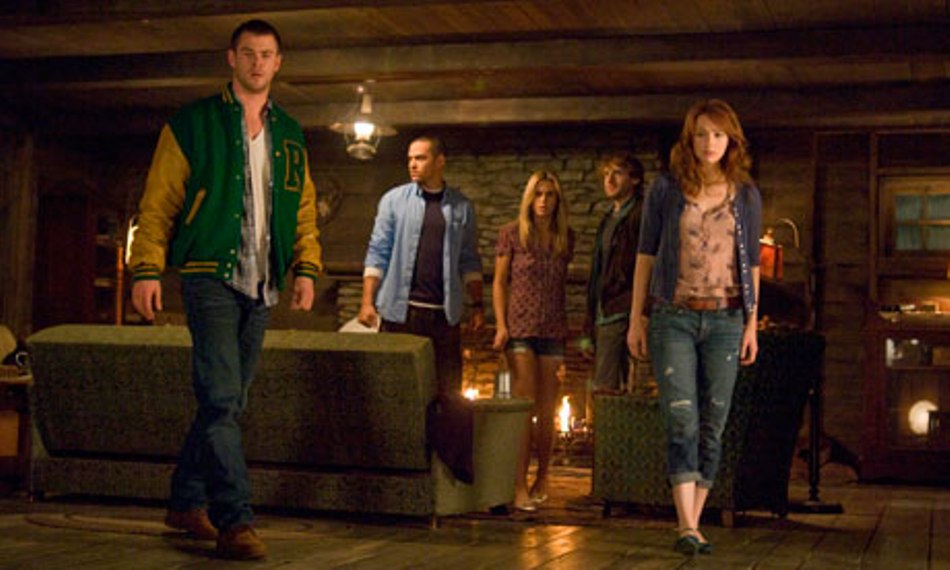 So I was surprised when so many of my friends kept telling me that I need to see this film, and that I should avoid watching trailers, or reading anything about it, and just watch it and be surprised by the twist. Having rewatched a trailer for the film (after watching the film) it does say things like, "you think you know the story..." and "you think you know the place..."

You think you know it because it is the same cabin used in Sam Raimi's cult classic Evil Dead films. In fact this movie's setup seems to share quite a bit in common with The Evil Dead, that is one of the reasons I felt I had already seen the movie after having seen the trailer. 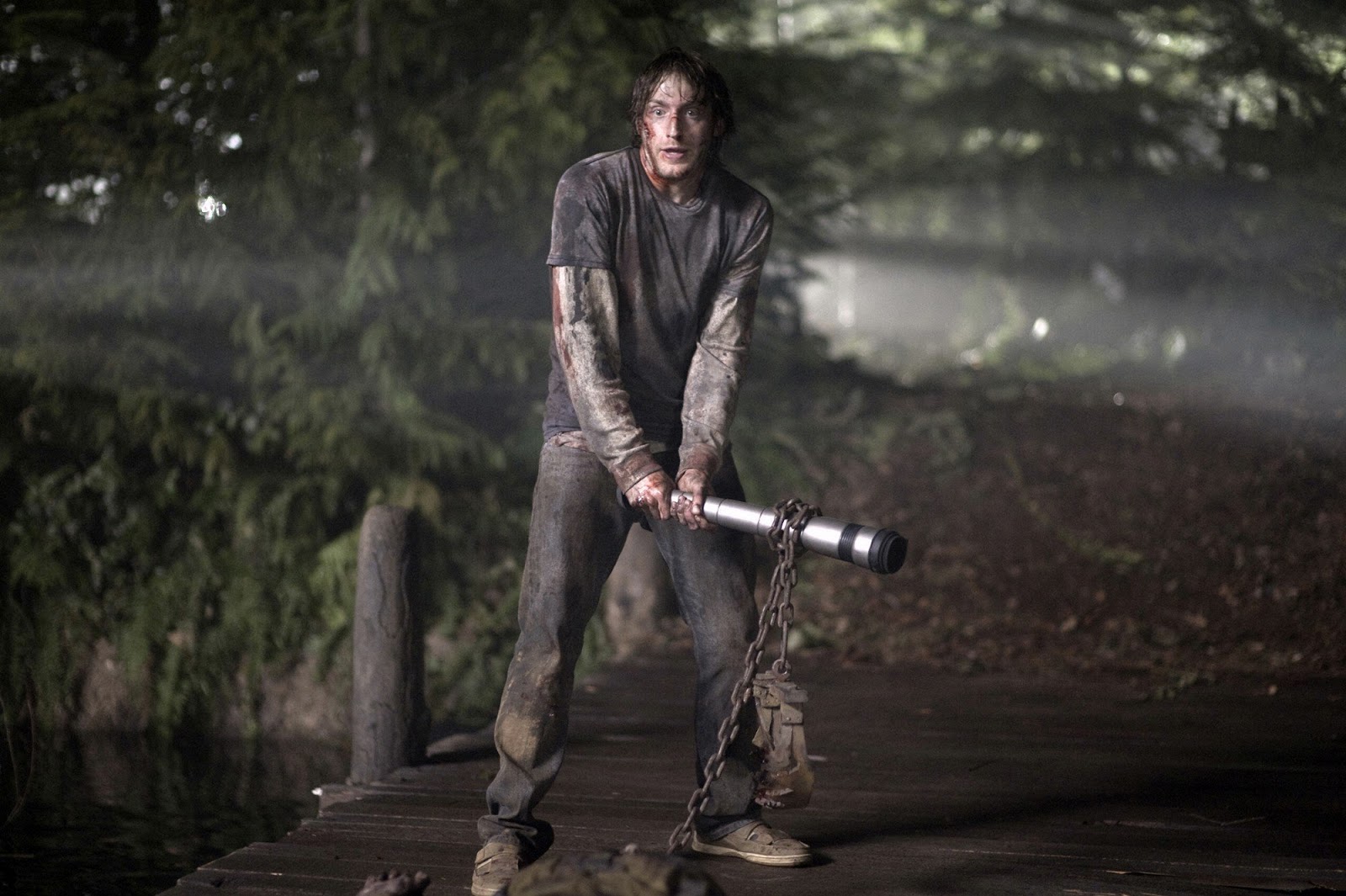 However big people seem to think the twist is, there are moments even in the trailer and toward the beginning of the film that give away the twist or, I guess I should say "hint" at it.

Yes, this film does shake up the genre by taking the standard setup and then turning it on its head and doing something different with it, but I might be one of the few who wasn't completely blown away or shocked by the twist. BUT that is not to say that it wasn't good, or a welcome twist on the genre. It probably says more about the fact that the twist was talked up so much by friends and reviewers that I was expecting something crazy, and I pretty much got what I was expecting. The film gives you enough that you can piece together the twist before we are supposed to fully know the secret.

In fact I would argue that, again having rewatched the trailer, that the trailer and early scenes of the film give away too much too fast.  If everyone was so interested in keeping their discussions/reviews of the film so spoiler free, it's a shame that the film and trailers didn't feel the same way.

In fact an entire scene in the latter half of the film is ruined by an early scene (seen in the trailer) in which a bird flies into an invisible wall that supposedly surrounds the cabin in the woods.

Like The Evil Dead, The Cabin in the Woods doesn't take itself too seriously, which is to its credit. The film shouldn't take itself overly serious.  It's almost a commentary on the genre as a whole, and as such it should be a fun experience. 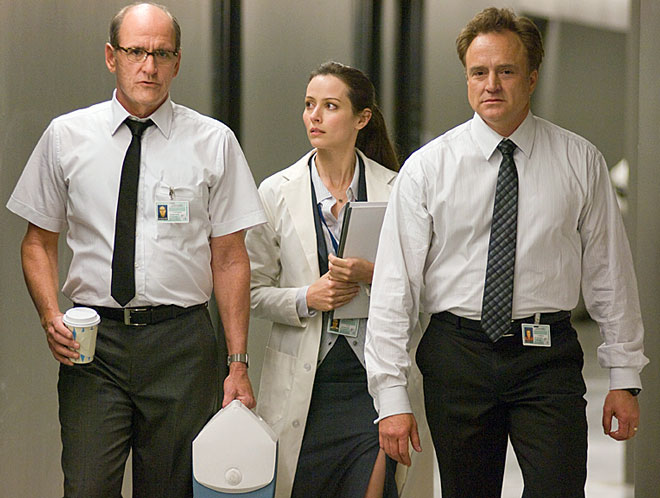 This is one of those films that would be fun to watch with a group of friends. It has its share of scares and shocking moments, but because there is something more going on behind the scenes (or beneath the scenes) it really isn't as scary as it might have been otherwise.  The bottom line is this film is entertaining and should be watched with friends, however I can't help feeling the experience won't be quite the same the second time around.


In keeping with the theme of films I've seen recently, this film (like The Hunger Games, and Battle Royale) feature adults forcing young people into a confined space, so they can watch them die all for the sake of some sort of imagined "greater good."

There are moral questions and plot hole questions throughout the film...

As for the moral questions we are asked to consider whether or not it's ok to sacrifice the few for the sake of the many, and once we justify that if it's ok to do as the puppet masters do and enjoy the show while young people are being brutally murdered.

Why ruin the scene where Curt tries to jump the gap (only to hit the invisible wall and fall to his death) by showing a bird fly into the wall toward the beginning of the film?  We were expecting it, waiting for it, and the shock value was completely taken away.

Wouldn't the bloodbath that ensues toward the end of the film have satisfied the Ancients? Or did it have to be those offered up as sacrifices?  Surely someone else there was young and stupid.

How did the monsters/creatures come to be organized in their cells? After releasing them, how do the puppet masters get them back into the holding cells? If they could be controlled enough to be held captive, wouldn't the monsters know to only attack those offered up as sacrifices.

Why did it not matter if the virgin died, especially if she wasn't really a virgin (I think the film tries to explain this)?  If she didn't die, is she released? It seems as though they just leave her to die anyways...

And maybe most noticeably:

This was obviously happening all over the world, so why doesn't the ritual in Japan require all the character archetypes? It is very clearly a class of 9 year old girls and not a group made up of the required character types...