This new spin on an old franchise has the difficult task of boldly going where we have gone before and breathing new life into it.  J.J. Abrams has found a way to successfully combine the banter and beloved character/relationship building of the old series with more modern sci-fi action.

It's also a reflection of today's issues. We begin the film by catching the tail end of a previous adventure. The sequence combines Star Wars and Indiana Jones and finds Spock ready to die to preserve the Prime Directive. Of course, Kirk saves the day despite his orders, and gets himself into trouble again. Which is one slight problem I had with the film. He seems to constantly break the rules and yet without the proper reputation that would allow him to keep his status, he somehow never seems to be in that much trouble. He loses his ship once and then is all to quickly able to get it back again. 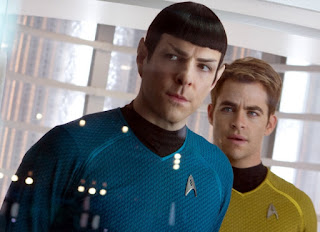 During a meeting with all the big starship captains, a terrorist attacks killing several incuding Kirk's mentor Pike. For revenge they agree to hunt him down and kill him, no questions asked. Obviously this is where the allegory for today's issues enters. They are tasked with going after a terrorist in order to kill him without due process, but Kirk sides with Spock taking the paragon route deciding to capture him alive. I'm not sure we need more of these allegories, but it works in this film even if  the allegory is pretty blatant. The allegory is a combination of Tsarnaev and Bin Laden. Notice the one who assigned the mission is one of the bad guys and potentially as much of a threat as the one they are after in the first place (as if they are trying to tell us something).

The problem is they work hard to establish the value of life, but how much do they value other's lives? There is a large death toll throughout the film, including many members of the Enterprise crew who get sucked out into space, but no one really stops to value those lost lives. 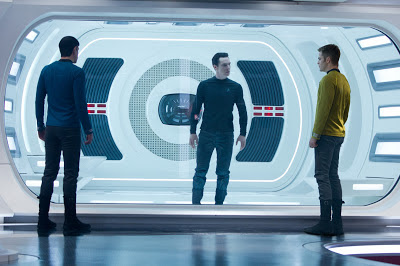 Abrams has a knack for putting together large casts and making them play well together. The banter is quite good and at times quite humorous. I like the way they establish the characters and their relationships. Unlike the original Star Trek series, the banter happens during the action sequences and Abrams manages to use it to build tension.

Sometimes the action can be a bit much, to the point where we wonder if we might be missing something. One of the things that makes the villain so good is when we spend time with him getting to know him. Here instead of making one strong villain, we split it up with multiple bad guys and as a result none is quite as strong as they could have been. Perhaps there's a little too much reliance on the fact that viewers likely already know the villain and opted instead to concentrate on other things.

Abrams has payed special attention to "fan service" with these new Star Trek films, but I can't help wondering when the series will get to the point where it will boldly go off in its own direction. Considering that they've established an alternate time line they can either go wherever they want, or they can just retread old ground with a slightly new take. That is essentially what this film comes down to. Even if we appreciate some fan service, I think we don't need things like the cameos from Leonard Nimoy anymore. The scene where he pops up was completely unneeded, it didn't change anything or help anything other than to warn us that what we are about to see is like what we've already seen.

That all being said, I should also say that if you are wanting to remake an older Star Trek film, this is maybe the best way they could have done it. The friendship and rivalry between Spock and Kirk builds to a new level in this film. They flip iconic scenes from maybe the best of the old Star Trek films right on their head and somehow it still feels natural and fresh.

They are in a strange position with these Star Trek films. The first one opened a new timeline so they could take the series wherever they wanted, but at the same time they are tied to characters we already know. They have to constantly ask themselves how far can we stretch things, and just how much are fans willing to accept? How much of the fan service is necessary? and are they destined to rehash a lot of old material? Either way there are a lot of lovable characters, and dare I say this new series is better than the old one? With this film Abrams is likely done directing the series. He now moves on to Star Wars, and we can only hope he can breathe new life into that series the way he has Star Trek.
Posted by Zach Owens
Email ThisBlogThis!Share to TwitterShare to FacebookShare to Pinterest
Labels: 2013, 4, action, sci-fi, thriller