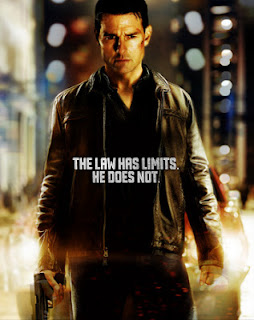 
Jack Reacher is based on a series of novels by Lee Child. This film gets its story from novel number 9, I'm not sure why that's the starting place, but perhaps it could turn into a series of films for Tom Cruise. Child and Christopher McQuarrie wrote the screenplay, and McQuarrie directed the film as well. It's only the second directorial job for McQuarrie, but he has more experience as a screenwriter. His screenwriting filmography includes solid films like The Usual Suspects and Valkyrie, but also unfortunately includes The Tourist, so I guess you could say he has an inconsistent track record.

I am surprised, after viewing a trailer for this film, to say that I actually liked this movie. It was much better then they made it look.  I've seen lots of movies where the trailer was much better than the film, but this one is the exact opposite. If it has to be one way or the other, I'd prefer the latter, but sadly a bad trailer may not get your film many views.. but lets move on before I get too far off topic. 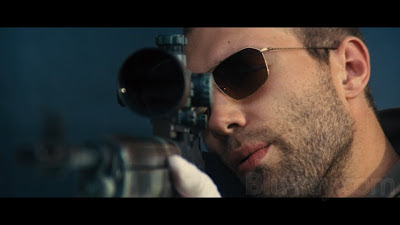 The film opens with an unknown gunner firing at seemingly random civilians. Six shots are fired, and five people are dead. There is a montage of evidence collecting, and we are told that all the evidence suggests a man named James Barr is the killer.  There is a lot of evidence, almost too much, it's as if he wanted to get caught.  Of course, he claims his innocence.

During questioning he makes on request, "get Jack Reacher."

Jack Reacher is essentially a vigilante. He is an ex-military man who tries to live his life off the grid, and drifts from one place to another. He has his own brand of justice... the one we all wish someone could exercise, but we also realize how dangerous the idea could be.  Which makes me wonder how he has stayed out of jail... but again I'm getting off topic.

Like Columbo, Jack Reacher generally knows the answers from the beginning (or at least knows more than everyone else). Also like Columbo, he is an unorthodox investigator although for different reasons.

Where Columbo gathered evidence and questioned his suspects (a lot, annoyingly, humorously) till they accidently gave him information he needed, Jack fights his way through his obstacles and doesn't follow the more law abiding methods of investigation.

Normally Reacher is the last man Barr would want to see, but he may be the only man who knows him well enough to know that he is innocent.  Reacher knows that even if Barr did kill those people he wouldn't have done it in the way they say he did. He wouldn't have left the evidence like an amateur, and he most certainly wouldn't have stopped to pay for parking before taking his shots.  There is clearly more going on, but only Jack Reacher is willing to dig a little deeper.

There is one of the best car chase sequences I've seen in quite some time, but sadly it ends a little bit questionably. We can see it in the trailer, Reacher gets out of the still rolling car and walks nonchalantly into a crowd (who we assume are random people, not people he knows) and they quickly take him in and hide him while cop cars and helicopters swarm the empty vehicle.  I find it a little hard to believe that random people on the street would be so quick to hide someone the cops were clearly chasing, but I guess that's beside the point.

While I'm making comparisons to Columbo, let's take it one step further.  The similarity is in the overall storytelling. It begins with a murder, or in this case multiple murders. The investigator we follow generally knows the answers from the beginning and the rest of the runtime tells us how he exposes the real killer.

It's a style that began with Columbo, and it's been modernized for today's movie going audience.  The difference (aside from the violence) is that instead of following the killer as he sweats under pressure till he slips up, here we follow the investigator. There is more mystery to this structure, but it still manages to feel similar. 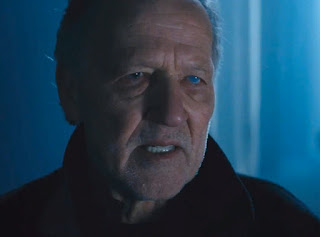 If I had one complaint it's that the main villain, played by Werner Herzog (who knew he was an actor???), is set up as this very dark, sinister character, but we don't spend enough time with his character.  They don't really establish his motive or his organization. There is one good scene with him in which he deals with one of his henchmen's failures, but it just isn't enough. He needed more screen time. In the end he pretty much goes down without a fight.

But that does lead us to the tough question this film wants to ask. Is the legal process enough? Sometimes good people take the fall, and bad people go free. In this film we come to agree with Reacher that the bad guy is deserving of death and yet only Reacher can (or will) do something about it.  That's why he has to stay off the grid.

It's like Batman, or most other super heroes. They are considered vigilantes. Unlike Reacher most comic book super heroes don't kill, they leave them for police to deal with, but Reacher makes sure that the threat will not continue to hurt people in the future.  Being a lone drifter, completely off the grid, and otherwise unreachable is his mask. 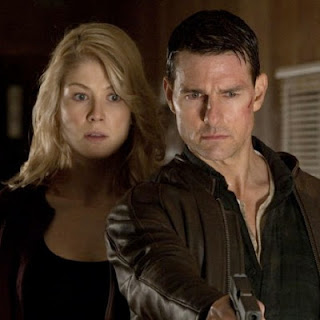 
"Imagine you've spent your whole life in other parts of the world being told every day you're defending freedom and finally decide you've had enough. Time to see what you've given up your whole life for. Maybe get some of that freedom for yourself. Look at the people.  Now tell me which ones are free. Free from debt, anxiety, stress, fear, failure, indignity, betrayal.  How many wish they were born knowing what they know now? How many would do things the same way all over again?"

He also wonders how many would choose to live life the way he does. He suggests that maybe he is one of the few totally free people. He chooses to live off the grid and perhaps that's the only way to have true, complete freedom.

This film makes us think about these things while delivering an interesting and action packed mystery.  It is a pleasant surprise.

Posted by Zach Owens
Email ThisBlogThis!Share to TwitterShare to FacebookShare to Pinterest
Labels: 2012, 4, action, based on a novel, crime, mystery