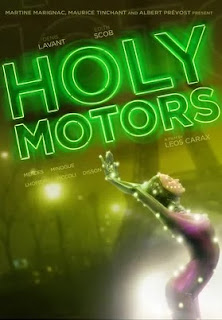 
This one is a tough one to tackle, and certainly not for everyone.

At first you think this film makes no sense. It seems to be a collection of nonsensical scenes that range from emotionally touching to downright weird, but I assure you it'll make sense if you stick with it.

Denis Levant plays Monsieur Oscar who begins the film in a strange room with wallpaper that looks like trees. He finds a door and unlocks it with a key that is either on his finger or his finger is the key. He steps through and finds himself in a theater. The screen is illuminating enough of the room that he can see the crowd staring up at the screen as if in a trance. 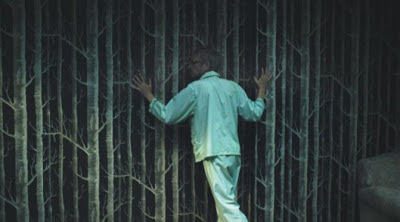 It's as if he has walked in as we are watching the film.

Next we see him walk out of his house. He passes his kids, he passes his security guards. His property seems huge. He gets into his limo and prepares for his first appointment. His appointments are not what we think of when we think of appointments.  They range from dressing as a little old lady and begging for money on a busy walking bridge, to picking up his daughter from a party and having a fatherly moment, to dressing up in a motion capture suit and doing lots of flips and fight moves. 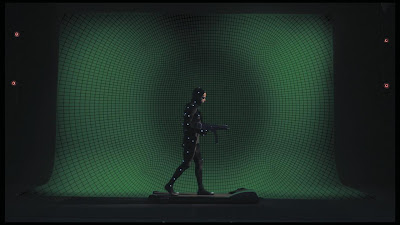 The motion capture sequence is one of the more visually stunning sequences in the entire film. 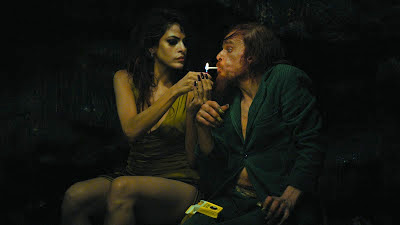 He plays a crazy, sewer dwelling man who eats flowers off of graves and crashes a photo shoot to steal the model and take her away to his home in the sewers.

Eva Mendez appears as the model. She embodies beauty. She says nothing and she does nothing, she is dressed up in a dress so complex that Oscar's character can re-cut and transform it into an even more modest dress, a Muslim dress. She still represents beauty and all Oscar's character (we) ask her to do is walk like models do back and forth showing off her beauty and fashionable clothing.

Everything in life is another appointment.  We only see M. Oscar working (aside from the scene with Kylie Minogue who acts along side him in one appointment), but we get the sense that everyone is acting. Everyone is just another actor involved in these "appointments" that make up the scenes of our lives.  It seems as though everyone is transported around in white limos to their various "appointments." Everyone plays their part in the different scenes for the day and then move on to the next. 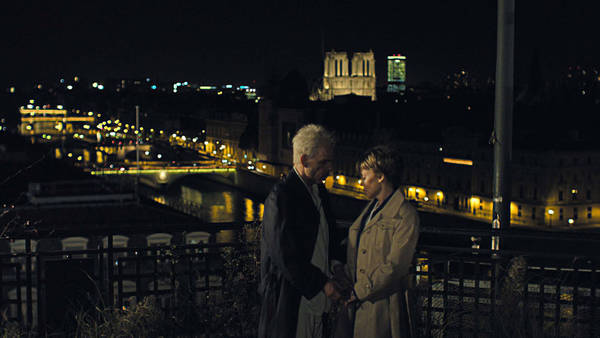 Some of these appointments have him acting as a killer, and one has him dying of old age. The people he kills are usually himself, or if not himself, at least played by the same actor as if to tell us something. He even kills one person by stabbing him in the neck, and then he stops to shave his hair, paint on a similar scar and change his clothes so that the dead body resembles his own. While he is doing this the body (apparently not quite dead) uses what strength he can muster to grab the knife and stab Oscar in the neck in the exact same spot. The two bodies, now looking identical, lie dying side by side in nearly the exact same position.  Even though he dies a number of times, he gets right back up and heads back to the limo to prepare for his next appointment. 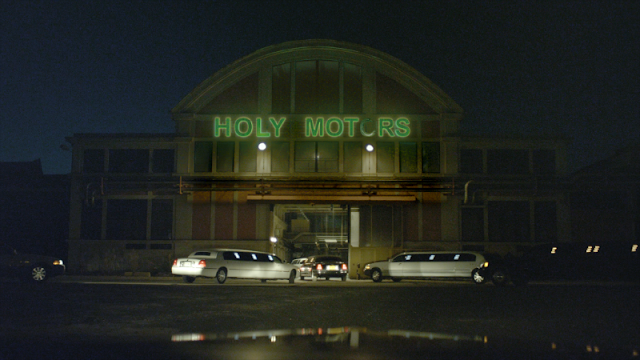 This may just be my interpretation of the film, but let me risk a somewhat strange comparison in order to put all this madness into perspective.

Remember Wreck-it-Ralph?  In that film, video game characters are essentially actors who go into their game and play their role.  In this film Oscar is an actor who goes around and plays many roles. Other than while he is in his limo we never see him simply being himself.  And like anyone starting up a game to see the characters act as we control them, we simply spectate his "appointments" while he plays the required role. We eventually start to notice that it isn't just M. Oscar, everyone around him also seem to be actors playing the other characters.

It suggests that M. Oscar is a captive of this theater world in which he may not have been meant to exit his room at the beginning to witness the people watching his world. He simply exists in the background as a piece of machinery plugged in where necessary. As the audience is watching a movie, and as we come to his scene, he has to be ready to put on a show, and then move to his next "appointment/scene" in the next film.

It suggests that in this world, film and story are simply mechanical and the big machine that puts it all together is just shifting pieces around to put together a story for our entertainment.

Like the children in Wreck-it-Ralph heading into the arcade to play a game, we are stepping into the theater and watching a series of scenes.  M. Oscar, at the beginning of the film, opened a door allowing him to cross over to the other side where he doesn't belong, in order to see us watching the screen where he lives and works.

CONCLUSION:
This film seems strange, but there is enough there to piece together some sort of interpretation that will make sense to you. You may not walk away with the same interpretation that someone else has, but isn't that what art is all about?

Oscar is in a movie playing out scenes from various movies.  That allows this film to cover every genre.  It is certainly one of the more interesting films from last year. It got a decent amount of attention from critics but was completely overlooked during award ceremonies.

Understand it's a strange film, but an interesting one nonetheless.