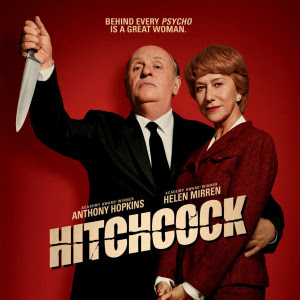 And yet,  they got it wrong.  As we know, Hitchcock was famous for making films about a falsely accused man trying to avoid capture, and prove his innocence.  This film to a certain extent make Hitchcock himself wrongly accused.

For one, as good an actor as Anthony Hopkins is, Alfred Hitchcock he is not. Scarlett Johansson is also not Janet Leigh. They do their best to look like them (even though they don't) and perhaps even sound like them, but I couldn't accept either.  I was always very aware that I was looking at Anthony Hopkins trying his best to do a Hitchcock impersonation.  He plays him very serious, even disturbed, which is not true to the man. Hitchcock was a very humorous fellow.  It's a shame that this film missed that side of him. 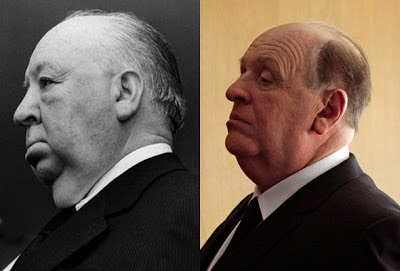 Be that as it may, we can possibly look past it, IF the story is good. It isn't a bad story, it's just not an accurate story. First of all, Hitchcock fans, myself included, watch this movie expecting to see a behind the scenes look at the making of Psycho. It's a dramatization rather than a documentary, perhaps a documentary would have been better. What we get is a behind the scenes look (a non factual one at that) at the relationship between Hitchcock and his wife Alma Reville (Helen Mirren), with the making of the film as almost a subplot. 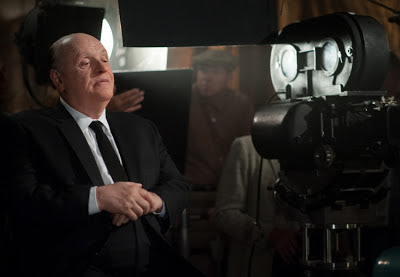 The film makes a point of showing that Hitchcock had to mortgage his house to personally finance the film, which of course is not true. Robert Siegel, of NPR, interviewed Patrick McGilligan, author of Alfred Hitchcock: A Life in Darkness and Light and during the interview McGilligan points out it just isn't true, "if you can take out a mortgage on your house and make a movie in Hollywood — then or now, no director did who was under studio contract."

The film also wants to make a point of showing strife in Alfred and Alma's relationship. Their relationship is the core of this film, and as McGilligan points out, they got it wrong. He explains, "It's not true that they had strife in their marriage. In fact, I always say it's one of the few happy marriages I know of in Hollywood that lasted for 50-plus years. And they were creative partners, although the film goes way overboard to depict Alma as the person who bails Hitchcock out of every crisis that he's supposedly undergoing."

The scene in which Alma goes and takes over directing an important scene while Hitchcock remains at home in bed due to a self induced illness is not factual and a very upsetting point in the film for many Hitchcock fans. 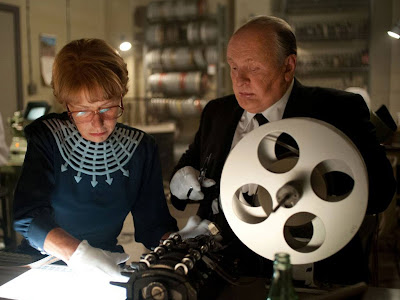 In the filmmaker's defense, they were not granted the rights to use any footage from Psycho, nor were they able to film at the Bate's home that still stands on the Universal back lot. As Ebert pointed out, There's irony here, because in 1998, director Gus Van Sant won permission to make an actual shot-by-shot remake of "Psycho."  After that useless failure, perhaps that's why they weren't granted the rights.

Even though I would have preferred a more accurate portrayal of the making of Psycho, in the end McGilligan, speaking as to how the man himself would view this film, points to the only reason this film can be considered to work,


"...Hitchcock — you know, the film that we're talking about — is something that he would delight in even if he might be horrified at aspects of it, because it is partly the consequence of this long process that he started in the 1920s of building himself into a public personality that we could take delight in, to such an extent that I don't think people in general are interested in the real Alfred Hitchcock."

It is about the legend not necessarily the real man, and that being the case it's still a somewhat interesting film.
Posted by Zach Owens
Email ThisBlogThis!Share to TwitterShare to FacebookShare to Pinterest
Labels: 2.5, 2012, biopic, drama