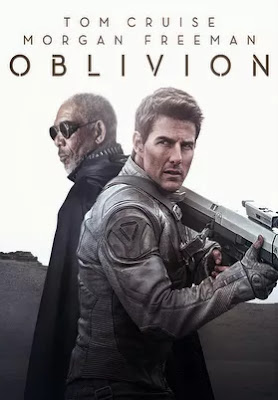 
Most reviews have been overly harsh toward this film, and while I wasn't blown away by it, I don't think it's as bad as most people make it out to be.

It is a bit of a mishmash of references or perhaps just similar ideas to other science fiction films, but this sort of thing happens in film (particularly sci-fi films) all the time... If that's the worst thing you can find to say about the film then perhaps I would say the negative reviews are... well... let's just say, too negative. You can give it an average review, and acknowledge that it isn't very original without having that fact ruin the experience entirely, which is I think a bit more deserving for this particular film.

It's difficult to talk about the film without spoiling the film. I'll try to be fairly general, but to talk about certain things beyond the beginning of the film IS to spoil it... Consider yourself WARNED.

Jack (Tom Cruise) and Vica (Andrea Riseborough) have a similar role as Wall-E.  They are the only ones on this post apocalyptic earth, that looks only partially destroyed, even though it was supposed to be uninhabitable at this point. 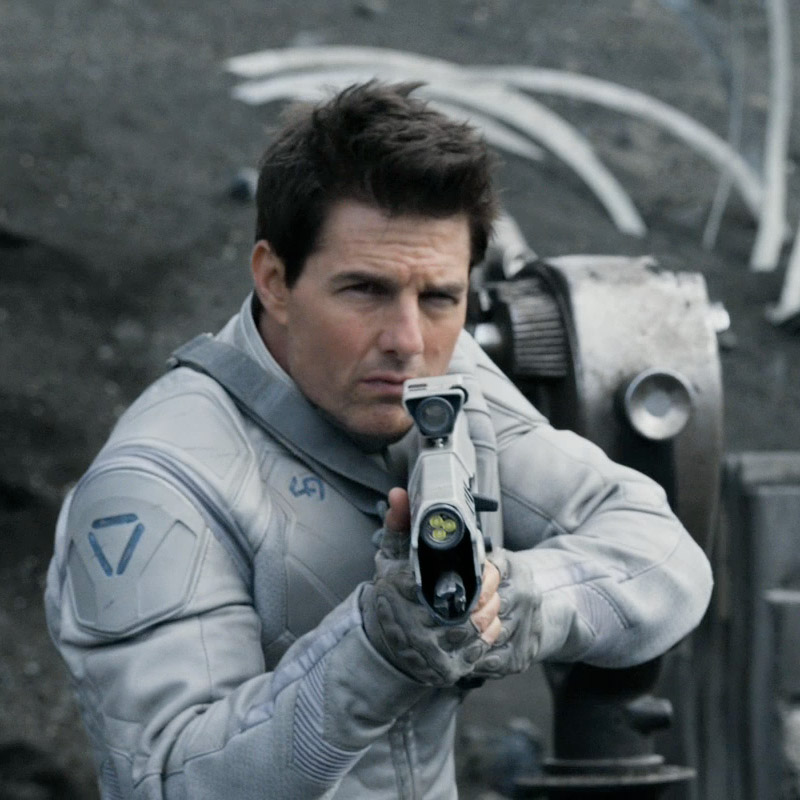 They live in a glass house in the clouds and they are responsible for drone maintenance and security. This so-called uninhabitable world is inhabited by things referred to as "Scavs," a short form of "scavengers." Tom Cruise rarely feels appropriately cast as the working man, because he's the same high intensity action figure he plays in most of his movies, but that isn't what this film needs him to be. It isn't until later in the film, when the truth comes out, that we start to think maybe he is a bit more suited to the role.

There's a painfully long voice-over at the beginning of the film, that tells us everything they want us to think rather than letting us reach our own conclusion. It's also rendered completely unnecessary later in the film, when the information is repeated, Jack and Vica meet Julia (Olga Kurylenko), a character found in some sort of cryo sleep.

We can tell early on that something isn't right about Jack and Vica's cozy little setup. When Vica speaks with their boss (Melissa Leo) in the Tet (a mysterious alien object/space station in orbit above Earth) she seems a bit robotic. She asks strange questions that make Vica very nervous. The Tet is an alien itself (possibly an AI comparable to Hal 9000).

Much like every other alien from any other alien movie, the Tet is only interested in earth for its resources. The trailer makes it clear that something more is going on. It also shows that Morgan Freeman is one of the "Scavs" and that Jack will join the "Scavs," so I'm not sure it's a spoiler to say so.

The thing that confused me most was the timeline. Jack and Vica have been on the planet working for some time, and yet just now a pod crash lands, and he finds Julia (who has been in some sort of cryo sleep, floating toward Earth for 60 years). Are we to assume that in about 4 years time (we are told it all started in 2017) we will have created and perfected cryo sleep for use on long distance space flight? Even if we assume that it's possible to have created such a thing, do we also assume that we failed to create escape pods with any sort of propulsion that could bring them back to earth in less time than 60 years?

As Jack is flying toward the Tet to investigate, something goes wrong with the ship and they jettison the pods, but supposedly this happened many years ago just off the planet (not even in deep space), and yet those pods are just now showing up on Earth.  We are left to assume that it took 60 years for the pods to float their way to Earth.

There are other things that are a little difficult to follow or put together upon the first viewing, and yet I don't feel inclined to rewatch it either.  It's not that it's bad, but it's not a film I see myself watching again and again.  They could have spent more time explaining some of the more confusing details toward the middle and end of the film rather than having that lengthy, annoying voice over explaining things we were later going to realize were lies anyway.

This is Joseph Kosinski's follow up to 2010's Tron: Legacy.  The soundtracks are fairly similar, moody and infused with electronic elements.  For Tron it was Daft Punk, for Oblivion it's M83.  I have always liked M83, so I also enjoyed the soundtrack quite a bit.

Many are finding similarities to 1970's science fiction films, and certainly there are more similarities to more recent science fiction stories as well.  Elements of The Matrix can be found in Oblivion, and for gamers, you will note the similarities to games like Fallout (setting), Mass Effect, and Borderlands (tell me the weapons Jack carries and the drones aren't modeled after those found in Mass Effect... Oh and the name for Tom Cruise's character, Jack Harper, is the Illusive Man's real name... just saying).

I won't say I was overly impressed, but I still found the film enjoyable despite not being very original.  I was never bored with Oblivion, but at the same time I can't imagine I'd want to sit through it a second time.
Posted by Zach Owens
Email ThisBlogThis!Share to TwitterShare to FacebookShare to Pinterest
Labels: 2013, 3, sci-fi