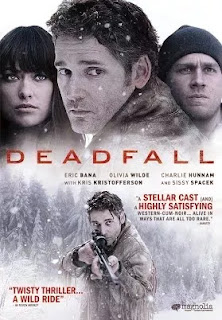 Addison (Eric Bana) and Liza (Olivia Wilde) are brother and sister. They have apparently robbed a casino, or some place that had money. It isn't very clear. They are heading toward Canada to hop the border with their new found fortune when they hit a deer and their car rolls off the road. An unwelcome cop stops by to help (having seen the wreck) and, of course, Addison shoots him because he is a bad guy on the lam.

Addison tells Liza that she didn't kill anyone so she could possibly get away even if she can't manage to make it to the border, or something to that effect. They split up, despite the fact that they are on foot in a snow storm and miles from anywhere.

Addison runs off leaving a trail of dead bodies as he goes, that somehow the half-witted cops can't seem to follow. Enter subplot: the local Sheriff is leading the chase, but refuses to allow his daughter Hanna (also an officer played by Kate Mara) to go along for very openly sexist reasons. Sadly, nothing is done to resolve the family issues here. There is no redemption for the father, and the broken relationship with his daughter sees no closure. 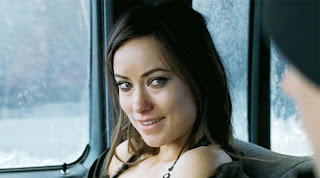 Liza has nearly frozen to death by the time she is picked up by Jay (what really were they expecting to happen wandering around aimlessly in the bitter cold?). Jay is a former boxer just out of jail on parole. He has gotten himself in trouble again, and ends up, similarly, on the lam himself. After driving for a while they pull into a motel to stop for a moment, but are told that the roads are closing because of the blizzard. You can see where this is going. While they are stuck at the motel overnight they apparently fall in love. It's that type of movie, where desperate criminals can fall so desperately in love overnight, they're willing to turn their back on their families for the sake of each other.

Jay rather suddenly plans to take her to his parent's house for Thanksgiving. Fortunately for Addison and Liza (who have remained in communication via their cell phones), Jay's parents live near the border. This is all building toward a reunion between Addison and Liza while holding Jay and his parents hostage. It all comes together very predictably. Of course, Liza has changed during her short time spent with Jay, and doesn't want her brother to hurt her new friends. Jay is, of course, a good fighter so all he really needs to do is get the gun out of Addison's hands, and of course none of the police officers are capable of tracking down the bad guys except Hanna, she was always right and knew what to do while the others were all stupid and completely disposable as characters (most of them die).

There is some pretty random dialogue here and there as well. Addison gets in a fight with someone he is about to kill so he can take his snowmobile. The man says, "I have a dead wife, she comes to me in dreams, she warned me you were coming." That's his only line in the movie, and yes it's really as random as it seems, he dies just moments later.

Olivia Wilde's character is just strange. Addison and Liza repeatedly remind us they are brother and sister, but they seem to have a different sort of relationship. They kiss several times, and she encourages him to check her out while she is changing clothes. Their incestuous relationship sticks with her even after meeting Jay, when they decide to make up names for each other and she chooses to call him Addison (even though they are clearly going to be love interests for the rest of the film).

This is supposed to be one of those films where we root for the bad guys, but I'm not sure why. I didn't care about any of the characters in this film. None of them are that deep or fleshed out, and as for the love story, Liza and Jay spend one night together. Most of it's spent with them not knowing each other's real names, while Liza lies to Jay and fantasies about him being her brother. The night ends with them having sex for no better reason than that there was nothing else for them to do while stranded at a motel.

The final scenes in this film hinge on the love story between Jay and Liza, and I just didn't buy it. It's as paper thin as everything else here.
Posted by Zach Owens
Email ThisBlogThis!Share to TwitterShare to FacebookShare to Pinterest
Labels: 1, 2012, crime, drama