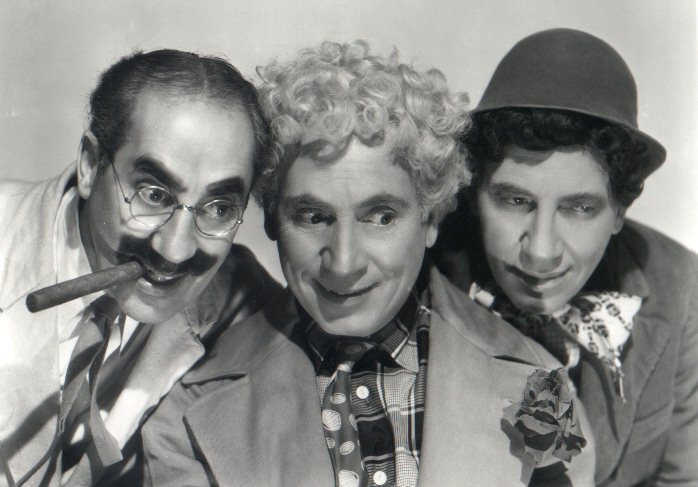 Let me start off by saying I've been inspired to watch some films by the Marx brothers by the guys at Filmspotting.net.  They do a very entertaining and deeply thought out podcast in which they review films.  They talk about all sorts of films from old classics to films just hitting theaters.  They frequently do top 5 lists, and movie marathons in which they discuss films of a specific genre or director.

During their episode #430 in which they discuss the original Die Hard movie, they decided to do a Marx Brothers film marathon because they recognized it as a hole in their film education.  This made me realize that as much as I love film history and classic films, I also have that hole in my own film education, having not seen a single Marx Brothers film.  Their names and their images are an iconic piece of pop culture, they are icons of cinema history and I still hadn't seen any of their movies.  With this in mind, I figured it was worth it to join them in their marathon and check out a few of their films myself.

I also wanted to mention that Groucho Marx was highly influential on many comedy filmmakers throughout film history, and served as the inspiration for such characters as Bugs Bunny, who instead of a cigar, carried a carrot and outwitted anyone he came across with his puns and double entendres, even doing the occasional Groucho impression in Looney Tunes cartoons.  Woody Allen was also inspired by Groucho, especially in his earlier films, and he often had a similar wit and play on words in his dialogue, also frequently speaking directly to the camera or audience.  Many of the comedic gags were also influential to many of the comedy teams that followed the Marx Brothers, and again Looney Tunes in general.

Roger Ebert is a big fan of the old comedy team. He wrote this article about the film Duck Soup that is worth checking out if you're interested.  In his article he wrote this:

"There is a kind of admiration for material that dares something against the rules and yet is obvious, irresistibly, funny. How much more anarchic the Marx Brothers must have seemed in their time than we can understand today. They were among the first to evoke that tone; you can see who the Marx Brothers inspired, but not who they were inspired by, except indirectly by the rich traditions of music hall, vaudeville and Yiddish comedy that nurtured them."

Josh and Adam, the hosts of Filmspotting.net, will be watching and discussing: Animal Crackers, Horse Feathers, Monkey Business, Duck Soup, and A Night At The Opera (not exactly sure the order they are tackling these), but all are available through the mail with Netflix and/or for $2.99 digital rental on Amazon 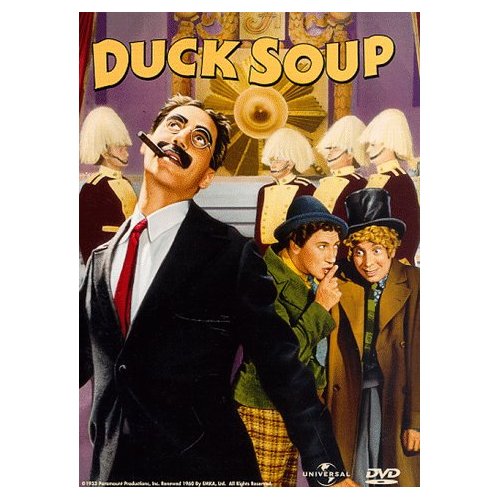 "I don't know what my formula is. I only know I like my characters to walk in clouds. I like a little bit of the fairy tale. Let others photograph the ugliness of the world. I don't want to distress people."

However with Duck Soup he is working with the comedy team of the Marx Brothers who, maybe didn't intend to distress their audience, but the other characters populating this film are very much distressed.

In fact, one thing that seems to have set them apart (at least in their time) was that the Marx Brothers had a bit of anarchy to them.  Their films (Duck Soup and Animal Crackers anyway) have the Marx Brothers acting out in high society gatherings and "distressing" most of the people there.  They made light of serious situations, for instance two nations going to war in this film, and said things that even now might be considered inappropriate or mean to the people in these situations.

I confess I cheated and listened ahead on Filmspotting's marathon. They began their marathon by discussing the film from 1930 Animal Crackers.  Josh and Adam (Filmspotting hosts) brought up a lot of good points about the Marx Brothers (Groucho in particular) that I felt held true for Duck Soup as well.  Aside from the fact that it's obvious that they influenced Bugs Bunny and Woody Allen, they mentioned that Animal Crackers felt like a filmed stage play, and while maybe it feels a bit less like that in Duck Soup, I did think that it felt a bit like a stage play on film.  I would also say that many of the gag segments involving Harpo and Chico felt like watching a live action Looney Tunes cartoon, and maybe I'm being too tough on them, but it feels fine to see this sort of thing in a cartoon, but a little too much here.  For instance, the segment where Harpo and Chico keep pestering the street vendor is humorous, but seems to go on too long.  Eventually he comes back and Harpo begins pestering him again, but in seemingly childish ways from setting his hat on fire, to ruining his lemonade by putting his feet in it, for no better reason than to ruin the man's business, and you can't help but wonder why or how that fits into the greater storyline.

This is where I should mention that much of this film feels dated, in fact a little too dated for most modern viewer's tastes I'm afraid.  There are a few musical numbers despite the fact that this is not a musical, and for the most part they feel out of place and strange.  Just when I was getting to the point where I was enjoying the film for its wit and play on words, they begin a musical number that goes on way to long, and it seems to go out of control.

I thought about trying to explain the story, but then decided against it agreeing with Ebert,

"To describe the plot would be an exercise in futility, since a Marx Brothers movie exists in moments, bits, sequences, business and dialogue, not in comprehensible stories."

One sketch I enjoyed, despite the fact that I could see it coming from a mile away, is a sequence involving a mirror and a Groucho lookalike that has been copied at least a few times over the years for it's simple, humorous fun.  At the risk of over quoting Ebert, I'll borrow his explanation of this entertaining scene:

"The other sequence is one of the gems of the first century of film. Harpo disguises himself as Groucho, and for reasons much too complicated to explain, sneaks into Mrs. Teasdale's, tries to break into a safe and shatters a mirror. Groucho himself comes downstairs to investigate. Harpo is standing inside the frame of the broken mirror, and tries to avoid detection by pretending to be Groucho's reflection. This leads to a sustained pantomime involving flawless timing, as Groucho tries to catch the reflection in an error, and Harpo matches every move. Finally, in a perfect escalation of zaniness, Chico blunders into the frame, also dressed as Groucho."

One thing is certain, the Marx Brothers have a very particular style of humor, and while I liked parts of this film, I can't say I'm as fond of it as Roger Ebert.   I'm afraid I can't say I would call myself a fan of the Marx Brothers just yet, but I will say I appreciate them for their contribution to film history and their influence on film and the comedy genre as a whole.

At just over an hour it won't take long to sit through this film if you are wanting to watch a movie, and you're curious about this piece of film history, but don't have time for something too long.  I enjoyed the dialogue and some of the gags, but some of them went on too long and the music segments were strange and felt unnecessary.

When it comes to the old classic comedy teams I prefer Laurel and Hardy to the Marx Brothers (at least for now).  Now, you may say, but Laurel and Hardy had gags some of which might be seen as similar to the one I complained about earlier, but the difference is that Laurel and Hardy only had bad luck themselves, they never set out to ruin anyone else's life.  If they made things difficult for others, which they frequently did, it was because they were clumsy, but they were good-hearted characters which made them far more likable in my opinion.  But, nevertheless, I'll keep and open mind and continue to participate in the Filmspotting Marx Brothers marathon, and perhaps I'll come around eventually.