I have been reading a lot of Haruki Murakami's work recently.  I like his writing, and every now and then in his novels he stumbles upon thoughts that I think are interesting if not meaningful in some way or another.  So I thought I'd share some quotes.  Oh and in case you were wondering what this has to do with film... His book Norwegian Wood has been turned into a film and it's available on Netflix if you're interested (I will say the book is much better though). 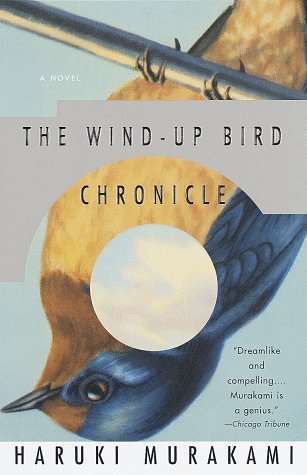 From The Wind Up Bird Chronicle

The main character is asked if he has guts, to which he replies no. I'm not so sure I have guts either, but we both think we have curiosity.  He had this to say about it:


"Curiosity can bring guts out of hiding at times, maybe even get them going. But curiosity usually evaporates.  Guts have to go for the long haul. Curiosity's like a fun friend you can't really trust. It turns you on and then leaves you to make it on your own - with whatever guts you can muster."

I think this statement is true. You can get by on guts, but if you don't have it you'd better get it if you have curiosity. Curiosity can only take you so far until guts have to take over.  I find I have curiosity to look into things, but rarely the guts to act on my curiosity.  So I'm not entirely sure about the assertion that they overlap, but certainly sometimes they do.  If you have curiosity you probably have to have at least a little guts, otherwise your curiosity will never be satisfied.

I think when we are younger we are very curious. We want to travel, and know things and try new things, but far too few of us have the guts to go out and do it.  There are times I wish I had more guts than curiosity.


"When did my youth slip away from me?  I suddenly thought.  It was over, wasn't it?  Seemed like just yesterday I was still only half grown up... And now here I was, inside a closed circuit, spinning my wheels.  Knowing I wasn't getting anywhere but spinning just the same.  I had to.  Had to keep that up or I wouldn't be able to survive."

There are times I feel just like this.  This is the fear that young people have when they realize they are out of school and have to work for a living, have to continue working or we won't be able to survive.  It's also probably thought process behind the beginning of a midlife crisis.  See Lost in Translation and my thoughts on that.

Two related ideas from The Wind Up Bird Chronicle


“Is it possible, in the final analysis, for one human being to achieve perfect understanding of another?
We can invest enormous time and energy in serious efforts to know another person, but in the end, how close can we come to that person's essence? We convince ourselves that we know the other person well, but do we really know anything important about anyone?”

If we don't fully understand ourselves or why we do what we do, or think what we think, or like/dislike what we like/dislike, how can we clearly explain ourselves to another in a way that they can truly know us?  Why is it we like certain music or movies and not others? All we know is that one form makes us happy and the other we find repulsive. We can try to come up with reasons to defend ourselves but it comes down to subjectivity. We simply can't explain it, it just IS that way.


"To know one's own state is not a simple manner. One cannot look directly at one's own face with one's own eyes, for example.  One has no choice but to look at one's reflection in the mirror.  Through experience we come to believe that the image is correct, but that is all."

This is a simple idea that everyone knows, but give little thought to. Would we even notice if we changed somehow? Whether it was significant or not? I think this is true of film as well.  I find I naturally dislike popular music (almost everything on the radio these days) and most popular TV shows, and even popular movies (sometimes).  I was never really sure why, but I just dislike those things, maybe it has something to do with this.  Maybe I just don't like the idea that I would be just like everyone else, or think the way everyone else thinks.

Not so much a quote, but an idea from Norwegian Wood

One of the themes from this book is the sad possibility that a person can be hurt on such a fundamental level that no love in the world could save him/her.

The book ends in a way I like movies to end, not with complete resolution that requires no thought or imagination. It's sort of Hemingway-esque, it just ends.  Like a snapshot of a life.  Just another day that follows.  There is more to their story, the characters will go on living their story, but we've already spent enough time with them and we all have to move on.  It's a more realistic way.

For Naoko in Norwegian Wood, Toru couldn't save her, her spirit was damaged beyond repair, but there was hope for Toru, which, perhaps, is Murakami's attempt to prove that maybe if the spirit wants to it can allow love to help bring it out of despair to be reborn in a sense. That's why I think in the end Toru isn't sure where he is, it's as though he has finally woken up.
Posted by Zach Owens
Email ThisBlogThis!Share to TwitterShare to FacebookShare to Pinterest