Lost In Translation or Lost In Life?

I could have titled this another Rewatch post, because it's been out a long time and it's a pretty popular film, but I'm not really studying the film this time around. I watched it again recently and it got me thinking a little bit about life. So this is more about what this film (and borrowed parts of Ebert's review of it) have to tell us about life.

The film could be retitled any number of ways: "Lost in Life," "Looking for Life's Translation." These characters are indeed lost, and looking for some way of translating life in general to gain a better understanding.  I suppose we all find ourselves like these characters once in a while, that's why there are such things as coming of age stories, midlife crisis'... and... college.

Ebert describes the characters as, "two lost souls rattling around a Tokyo hotel in the middle of the night, who fall into conversation about their marriages, their happiness and the meaning of it all... Their togetherness is all that keeps them both from being lost and alone." 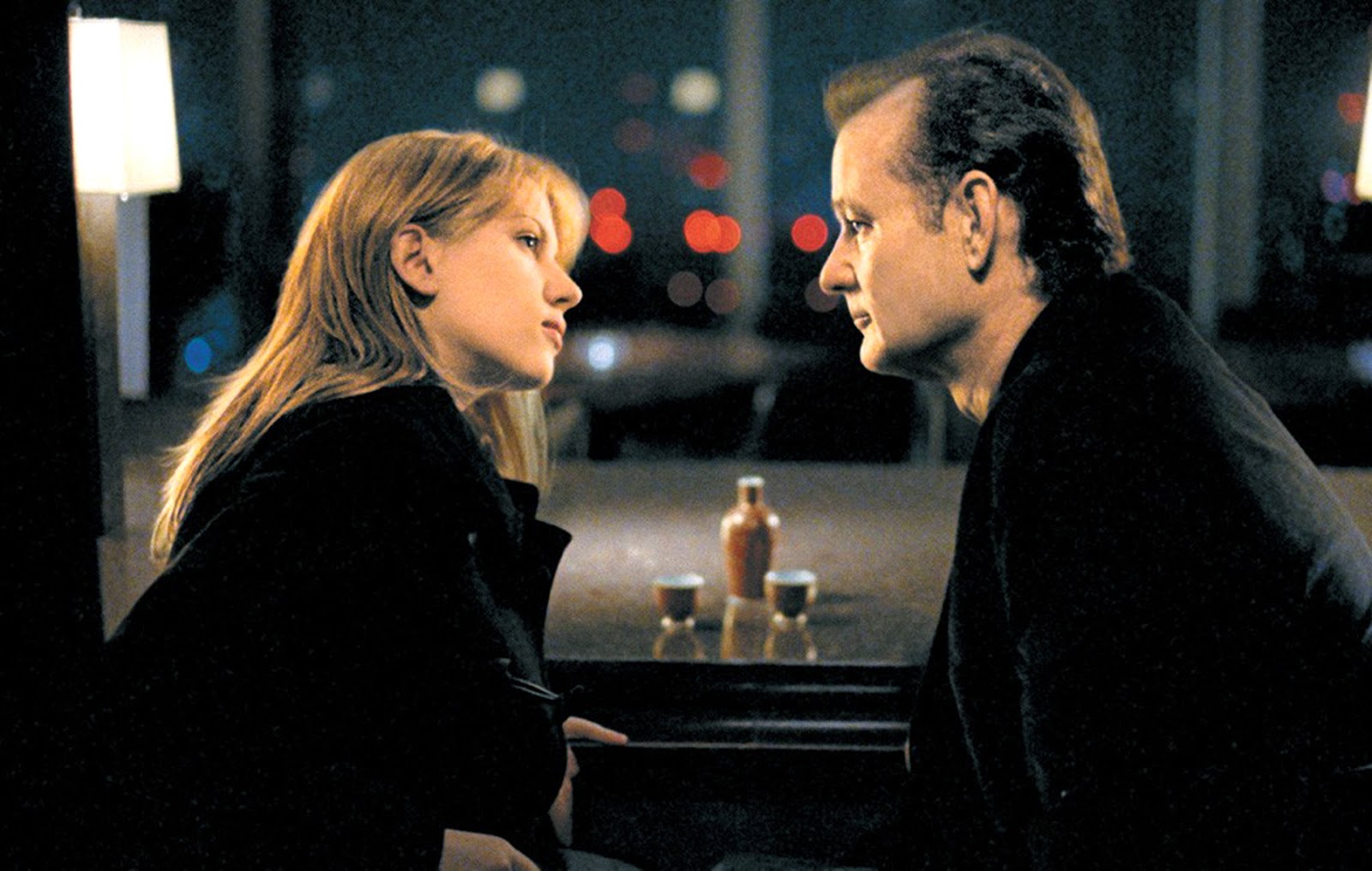 Upon this viewing I gave more thought to the idea that these two are characters going through similar life crisis, not just being Lost in Translation, but being lost in life.  Bill Murray's character is essentially having a midlife crisis, hardly sure why he is even there. He needs a break from his regular life at home with his wife and kids. He admits he could have stayed in the states and done a play, but chose to fly all the way to Japan just to endorse Whiskey.  It seems he is in need of a an adventure, although it's not clear as to what he thought he would find on this adventure, but then again is anyone?

Scarlett Johansson's character is a character I'm a little more familiar with. She is just out of college and a fairly newly wed, who is not really sure what to do with life yet.  But, like me, she is in that phase where you are a bit scared of the future and not sure what you are supposed to do with it.  She, like Bill Murray's character, and myself, just want at least one more adventure before real life takes over and we "settle in" for the long haul.  We want to travel and have fun memorable experiences, and then (we think) we may be able to join the rest of the world in being content with a job and a house somewhere.

Even though they are from different age groups they understand what each other is going through, and likely in ways no one else can. When you think about it, it's remarkable that a midlife crisis is actually fairly similar to that struggle we all go through either in college or upon graduating from college when we are supposed to be transitioning into adult life.

Bob can offer wisdom from life experience, while Charlotte offers a fun youthfulness.  It sounds like the beginning of an affair, but it never really goes down that road, because as Ebert says, "They share something as personal as their feelings rather than something as generic as their genitals."

"Well, I loved this movie. I loved the way Coppola and her actors negotiated the hazards of romance and comedy, taking what little they needed and depending for the rest on the truth of the characters. I loved the way Bob and Charlotte didn't solve their problems, but felt a little better anyway. I loved the moment near the end when Bob runs after Charlotte and says something in her ear, and we're not allowed to hear it.
We shouldn't be allowed to hear it. It's between them, and by this point in the movie, they've become real enough to deserve their privacy."

I agree, I don't think either character really solves anything or finds what they were looking for by the end of the film, but they were there for each other when they needed someone, when no one else could understand. So maybe they are one step closer, but I can't help feeling as though the answers to life's questions and what to make of life itself is never simple, but people matter. They are the ones that help us feel better about it.

I think part of the reason that myself, and so many others have such strong feelings toward this film is that it's a familiar struggle, and it's nice to know that we are not the only one.