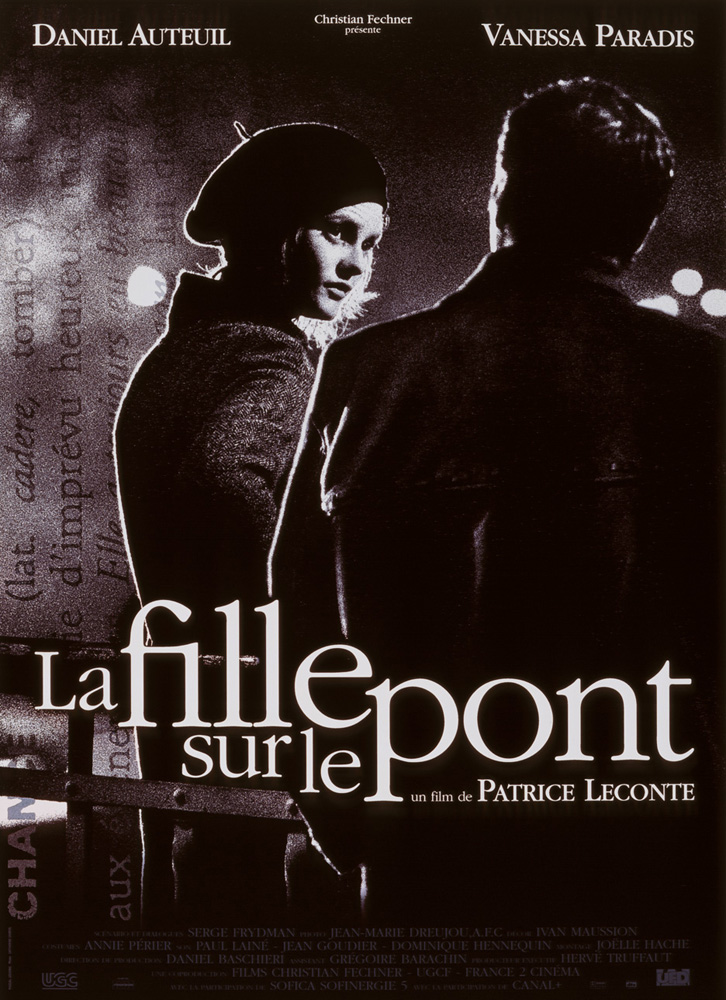 Another Netflix recommendation, the 1999 French film Girl on the Bridge; Directed by Patrice Leconte:
2/5*

It's a film about two people who have no luck, of course, until they meet each other. The girl, Adele, is young and depressed and about to jump off a bridge, when Gabor, a knife-thrower looking for a new partner, comes at just the right time to try to talk her out of it.

He has an interesting proposition. If she wants to kill herself why not let him throw some knifes at her for a living, if he misses her they'll make money, if he hits her... well, she hasn't exactly lost anything. She decides to dive in anyways, but Gabor jumps in after her and saves her. It's a case of them saving each other. He even mentions that it was so dark he couldn't be sure who saved who, and by the end of the film they'll still be wondering.

One way or another she decides to give the partnership a chance. They are able to make money doing their show, and later discover that Adele is actually quite lucky when gambling their winnings. It seems as though they are both suddenly becoming lucky for the first time in their lives.  They somehow also seem to develop a psychological link with each other, knowing what the other is thinking and being able to carry on a conversation with each other even if not in the same location.

Eventually she runs off with some guy she believes is "Mr. Right," but of course she realizes that he can't make her happy and it was foolish of her to give up on what was a good thing. Separating from each other seems to make their luck turn bad.

Instead of "star-crossed lovers" we have "luck-crossed lovers" who can't seem to even get by without the other one in their life.  They use a metaphor that a dollar bill is useless when cut in half, but when put back together it becomes of some value.

It's fairly rare these days, but the film is in black and white, which of course means lighting plays a significant role in the cinematography. Also rare nowadays is the fact that it's about a main character who is a knife-thrower.

To borrow from Roger Ebert again:


"What's best about the movie is its playfulness. Occupations like knife-throwing were not uncommon in silent comedy... In many new romantic comedies, the occupations of the characters don't even matter, because they are only labels; there's a setup scene in an office, and everything else is after hours. Here, knife-throwing explains not only the man's desperation to meet the woman, but also the kind of woman he meets, and the way they eventually feel about each other. Dr. Johnson once said that the knowledge that you will be hanged in the morning concentrates the mind wonderfully."

A desperate knife-thrower and his suicidal target... These are people who live on the edge. In that moment of desperation, just before you jump the mind becomes clearer than ever. Now imagine that you go through this with someone every single day.  It makes sense that these characters would form a link that only they could share.
Posted by Zach Owens
Email ThisBlogThis!Share to TwitterShare to FacebookShare to Pinterest