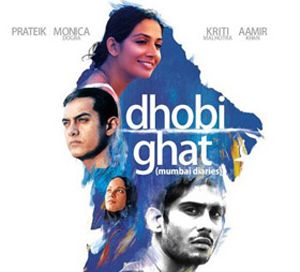 Dhobi Ghat is the story of 4 people, who wouldn't normally have relationships, meeting at getting to know one another, and inevitably changing each other's lives.

Shai works for a bank in New York, but she is visiting Mumbai to do some photography while on sabbatical.  While attending an art gallery she meets the artist Arun, who is a lonely painter in need of inspiration for his next work.  They spend just one night together before he tells her that he is moving and not really looking for a relationship.  She leaves some dirty clothes at his place on accident and Arun's Dhobi (laundry worker) named Munna, does her laundry and returns it to her.  Munna and Shai run into each other several times and become friends. Shai, while mad, is still somewhat taken with Arun.  She wants to know where he has moved, but she must do something for Munna before he will tell her.

Munna is an aspiring actor and needs photos taken to give out to filmmakers (like sending out head shots).  She agrees to take photos for him, but rather than typical studio shots, she wants to take more natural photos of him so they go on his regular work routine and she photographs him working.  Munna essentially becomes a tour guide for Shai, taking her around the less glamorous side of Mumbai.  They become good friends, and it's easy to tell that Munna has fallen for Shai. 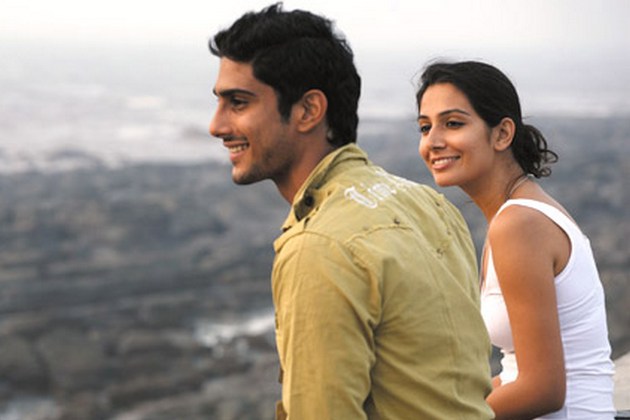 Meanwhile, Arun has moved into his new apartment and discovers a home video camera and several tapes left behind by the previous tenant.  As he watches the tapes, we meet the 4th person in this story, Yasmin who was making a video diary of her time spent in Mumbai to send to her brother who has never been there before. Yasmin is pretty and very charming, and Arun seems to draw inspiration for his art from watching the tapes.  He even seems to fall in love with her through watching these tapes.


There is a great moment when Yasmin is at a beach writing her name in the sand, but everytime she gets to the end of her name another wave comes along and washes it away.  She comments:

"Nothing lasts here, the sea claims everything. I can share everything with it. Tell it all my secrets, and they'll sink softly to it's depths.  The sea will keep them safe."

I'm reminded of Wong Kar Wai's 2000 film "In the Mood For Love" (nearly titled "Secrets") where Chow mentions that he remembers how in older times when someone had a secret that could not be shared, one could simply whisper it into a hole or crevasse in a tree and cover it with mud. There the secret would stay and perhaps they wouldn't feel burdened by it.  One could leave their problems behind and walk away from it.  In the end of the film he whispers his secret into a hallow place in one of the walls of Angkor Wat, and covers it.  It's a similar idea, but the ocean is far more vast, it can soak up far more and carry it deep down to the darkest places on earth.  Sadly we all know that it isn't likely that doing one of these things would wash our secrets away. We all carry these things with us for the rest of our lives, and all these characters seem to learn this one way or another.


I've mentioned that I like films that feature a city as one of the primary characters in the film, and in this film Mumbai and it's people are shown through Shai's photography and Yasmin's video diary.

Social class plays an important part in Mumbai and this film makes it a point to show it.  While Shai and Arun are of a similar social class their interactions are few and far between.  Shai and Arun instead are shown a side of Mumbai they aren't as familiar with by Munna and Yasmin.  Shai is warned by her mother and house maid that she shouldn't spend so much time with someone of low class like Munna, but she ignores their warnings.  It is never clear whether she is truly interested in having a deeper relationship with Munna or if she is just being a friend and hoping that he'll help her find Arun again. It could be that it's left just vague enough that it can be left to interpretation.

As for Arun he has been inspired and learns from what he has seen on tape, but he seems haunted by the fact that he'll never meet the other lonely soul he has learned from.  Either way each character (aside from Yasmin, who we never officially meet) learns something, and is changed by their experience.

This film is beautifully shot and well written.  Arun, while at his art gallery, says Mumbai is... "my muse, my whore, my beloved."  This has to be the director, Kiran Rao's sentiment as well.  She lovingly shows the city from it's many high-rises to it's dimly lit slums.  There are happy moments, but there is also a general melancholy mood about this film and the characters inhabiting it.

But Kiran Rao's story (despite the obvious love of the city of Mumbai) is smart enough to not limit itself.  It's the type of story that could likely be lifted out of the city it takes place in and moved to another big city and it would play out in similar fashion.  This is what allows us to see a place we've never been, while still speaking to us in a way we can all understand.  The film wants to remind us of the beauty in humanity despite the social class we come from.

If you have the time, it's worth checking out.