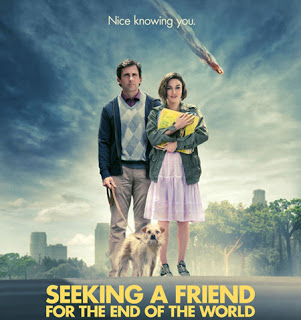 Seeking A Friend For The End Of The World is NOT a dark apocalyptic drama.  You might have thought it was if only you saw a brief description, but once you see the poster and realize it has Steve Carell in it you will know it won't be a dark drama.  The presence of Keira Knightley as a co-star also means this will be a romantic comedy.

We know from the very beginning, via radio broadcast, that humanity's last hope of averting global destruction has failed and that in around 20 days or so a meteor will hit earth killing everything.  You might think that this would lead to mass rioting and what not, but there are only a few scenes toward the beginning where there is any sort of rioting.  Dodge (Carell) tries to go about his life as usual at first, but he soon realizes there isn't much point to it.  His wife leaves him for the man she truly loved now that they are facing the end of times, but we never really met his wife and we never feel as though Dodge is that hurt by her leaving.  There is a funny part where Dodge gets drunk and passes out in a park. When he wakes up there is a dog tied to him and a note on his chest that simply says, "sorry."  For lack of a better name, the dog is henceforth known as Sorry.  The name of the dog becomes a running joke throughout the film, but otherwise the dog itself plays no significant role whatsoever.

Enter Penny (Knightley), she somehow finds herself crying on Dodge's balcony even though it doesn't seem as though their apartments are situated in such a way to make this happen (unless she went out of her way to go to his balcony, but there's no reason to assume that's the case since they hadn't met before).  She is upset that she missed her chance to fly back home to England to spend her final days with her family.  The next day a fire in the building forces everyone to evacuate, and Dodge is good enough to find Penny and make sure she gets out. Rioting outside forces them to flee the area altogether.  It's not much longer until they decide to stick together and help each other with their final wishes.  Both character's main goal, essentially, is to avoid dying alone.  Dodge wants to meet up with his old high school sweetheart (the so called "Love of his life," or "the one that got away") and Penny wants to fly home to her family.  Dodge fortunately knows someone who can fly and is willing to help her out. 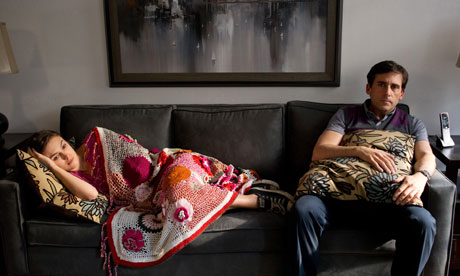 For whatever reason the suburbs are untouched by rioting and looting, and there are a few scenes of people gathering to have nice friendly times together before the end.  It's a very optimistic view of the days leading up to the destruction of earth.  As you might expect, this being a romantic comedy, Dodge and Penny's goals are not really that important because they become more interested in each other than anything else.  As nice as that is, I did find it distracting that Dodge is probably in his mid 40's (not to mention he recently had his wife leave him, and he's been chasing his old high school sweetheart who supposedly he still loves) and Penny is said to be 28 years old.  Now, I am a big fan of the film Harold and Maude, which is all about the idea that love knows no age, but still this seemed a strange pairing to me.

I will say that this film does  manage to surprise with some solid character development despite the fact that Dodge even says he doesn't want to meet anyone and spend his last days getting to know someone,  but of course that's exactly what happens.

There is one major plot hole to discuss as well.  There is a news broadcast on TV that says the meteor will arrive a week early.  Wouldn't that mean that the meteor would miss earth entirely?  It's as if they added this one quick shot of the TV just in case they wanted to leave on a happier note and save the earth, but then decided not to go that route but forgot to discard the shot of the TV.

One other nitpick is that their apartment was on fire (which is why they left in the first place) and there was rioting in the city where they lived, but later in the film Dodge is able to return to the very same apartment and everything appears to be just fine.  For this and other reasons this film just doesn't quite feel satisfying.

However, it's the concept of the film that makes you think the most.  I do think that it's interesting to think about what you would do if you knew the world was coming to an end.   The things these characters are struggling with, on a grander scale, is essentially the story of life.  People are searching for something, they want a solid way to go out.  The difference here is that with Earth set to be destroyed, it isn't just one person dying it's all of humanity and everything we've ever accomplished disappearing.  Many work for their legacy, they want to leave their mark on the world and have something to live on in their memory, but when nothing will survive everyone would have to rethink their lives.

I suppose if the world has to end there is no better way to go out then by holding the love of your life close and enjoying your last moments together as much as you can while waiting out the inevitable.