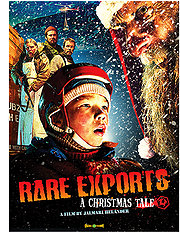 If you're looking for holiday themed films to get you into the holiday spirit, I can offer you this film, but I should warn you... it's not a family friendly holiday classic, and while it is enjoyable I'm not sure it'll put you in the holiday spirit.

It's not often that Christmas movies get made that are R rated monster flicks... oh yeah... and the monster is Santa Claus.  Before you write this one off let me tell you that it's actually surprisingly good, and at 84 minutes it's also not terribly long to sit through.  I once worked with someone who jokingly reminded everyone, every year, that if you look carefully at all those beloved Christmas songs, Santa certainly seems like a stalker and a pedophile.  The writer and director of the film Jalmari Helander, took a similar idea a ran with it, and that's where we get the concept behind Rare Exports: A Christmas Tale.

Part comedy, part suspense, part monster movie, the story is set in Northern Finland on a reindeer ranch where young Pietari and his father Rauno live. It begins on the top of a mountain near the ranch where a mysterious American corporation are sponsoring a dig with the hope of uncovering the real Santa Claus.  Pietari and his friend Juuso, sneak out of their town to spy on the activity up on the mountain.  Pietari realizes they are trying to find Santa, and does his research.  It turns out that the holly jolly Santa we all know is a lie and the real Santa was a monster that would come on Christmas day and snatch away the naughty kids.

As the legend goes, many years ago, the people of the town were threatened by a monster, but they were able to lure it over the lake where it broke through and froze into a solid block of ice.  They were able to bury the creature, still enclosed in ice, and over time the mound became a mountain.

Somehow, someway (we never really find out) Santa's elves get lose and start snatching the naughty kids and enough radiators and other heat producing machines to thaw Santa from his icy cage.  It's up to Pietari, his father and a few friends to save the rest of the kids and stop Santa from breaking free. 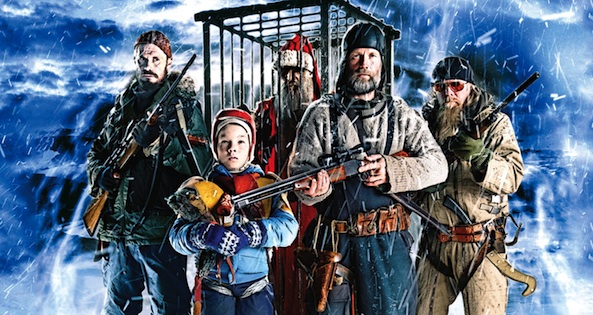 Pietari is the main character here, and he begins the film as a scared little boy who is looked down upon by everyone in the town, but by the end he has become a man who devises the plan that saves the town.  Sadly it isn't the smoothest transformation, he seems to just suddenly take charge during a rather tense scene.  It would have been better for the film makers to have given his character some build up.

This film is fairly comedic at times, and yet it's not over the top.  In most comedies the characters seem to know they are in a comedy and they act accordingly, but here, thankfully the characters know there is a serious situation going on which allows us to stay invested in the story without breaking the mood.  The cinematography is very strong, and there is enough suspense to keep you invested in this film throughout.  If you like the occasional monster film (Godzilla, King Kong, The Thing, The Host) you'll probably enjoy this film.

Although I should warn you that it's rated R for some language and lots of naked elves.
Posted by Zach Owens
Email ThisBlogThis!Share to TwitterShare to FacebookShare to Pinterest
Labels: fantasy, Finland, horror, monster