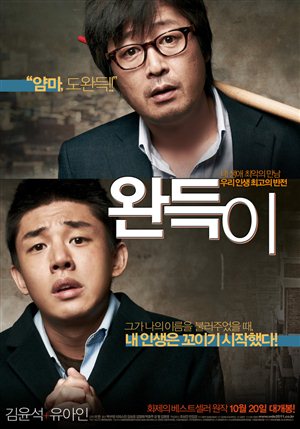 Punch is a Korean film from 2011 and it's available for instant streaming on Netflix.

The film is based on a very popular novel from Korea called Wandeuk by Kim Ryeo-ryeong.  It's a coming of age story about a boy named Wan-deuk, of course, who is a rebellious high school student who comes from a poor family and regularly gets into fights. His mother left when he was very young and his dad is a hunchback who worked as a cabaret clown with Wan-deuk's uncle until their nightclub was closed down.  Now they have to leave home to find work elsewhere leaving Wan-deuk to fend for himself.

We meet Lee Dong-ju who is Wan-deuk's unconventional, and hard-nosed home room teacher, and soon find out he lives right across from Wan-deuk.  We also come to find out that Wan-deuk's father had asked Dong-ju to keep an eye on Wan-deuk while they are away.  I can't speak for everyone, but I think it's a fear for most high school students to have to run into a teacher outside of school, and yet Wan-deuk has to endure his toughest teacher checking in on him on a daily basis.  However, obviously, this turns out to be exactly what he needs.  Dong-ju is not just hard-nosed in the classroom, he gives Wan-deuk the tough love he needs to start finding himself and a path for his life.

We've seen films before about inspirational teachers who have gotten involved in rebellious student's lives and helped turn them around, but I don't think we've met one quite like Dong-ju.
Yun-seok Kim does an excellent job playing the teacher/mentor for Wan-deuk. He knows to help bring Wan-deuk's mother back into his life, and that while maybe his studies are a lost cause, what he really needs is a dream to focus on. How many teachers do we see with the practicality to say that a student's studies are a lost cause and he should focus his attention elsewhere? With this in mind, Dong-ju encourages Wan-deuk takes up kickboxing which allows him to focus his attention on something that will also allow him to let his stress out. This is a character who is going through a lot, and he by no means has things easy.

Wan-deuk finds out his mother is Filipino, and doesn't work that far away. Some of the most touching moments in the film come when Wan-deuk spends time with his mother, and when he is asked, "who is this?" he is finally able to say the words, "this is my mother."

While Wan-deuk is the main character and we follow his story throughout, there is a fairly large cast of lovable characters and each are interesting in their own ways.

This is a film I had never heard of before. I randomly stumbled across in while looking over my Netflix recommendations and I'm glad I did. It's definitely worth watching.
Posted by Zach Owens
Email ThisBlogThis!Share to TwitterShare to FacebookShare to Pinterest