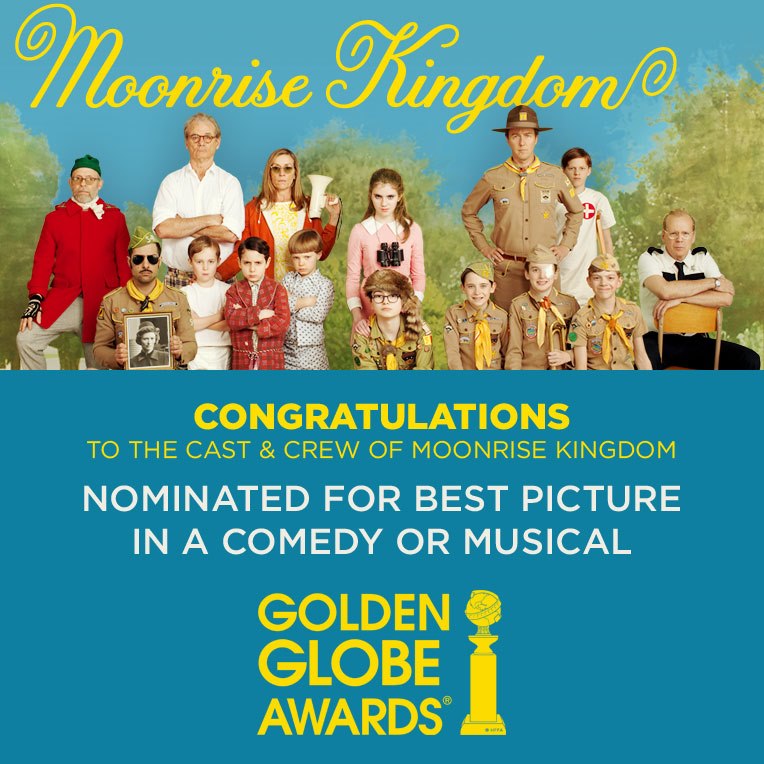 Today news broke that Wes Anderson's latest film Moonrise Kingdom has been nominated for Best Picture in a Musical or Comedy Golden Globe.

To celebrate, I thought it would be interesting to look at some of Wes Anderson's influences.
Here are two lists:

The first one is a list of 10 films that Wes Anderson himself picked as some of his favorite films found on Criterion Collection. Read the full list with Anderson's own input here   (granted this is more of a selection of his favorite Criterion releases rather than necessarily being his influences, but a person is influenced by art they like right?)

Wes Anderson has repeatedly mentioned the names Francois Truffaut and Louis Buñuel as his influences probably more than any other directors, and it's not hard to see their influence in his films. I've read a lot about Anderson and his influences, I've seen as many DVD special features on his films as I can get my hands on, and I've even been to a private screening of one of his films in which he did a Q/A session afterward.  He always mentions Truffaut and Buñuel.  More specifically, Anderson tends to repeatedly recognize Truffaut's film Small Change (otherwise known as Pocket Money, which is available on Netflix) as an influence on his films.  Undoubtedly there are many influences on his work, and considering that all of his films have been co-written by someone else in addition to Anderson himself, the list of influences has to be very large indeed, but certainly if you like Anderson's films it is worth looking into what influences him; you are bound to find something you like.

The second list is a list that the AV Club put together back in 2007 featuring 16 films that they felt (and rightly so) were very Wes Anderson-like even before Wes Anderson started making films.  Some are known to have been direct influence on Anderson, but whether they all are or not, chances are if you like Wes Anderson you'll like these films as well.  Read their full list with details here.
Posted by Zach Owens
Email ThisBlogThis!Share to TwitterShare to FacebookShare to Pinterest