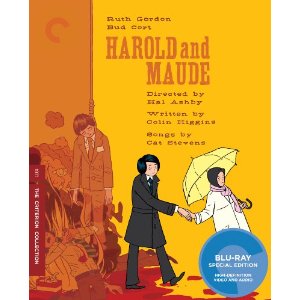 Recently Harlod and Maude got released on Criterion Blu-ray, and in case you haven't seen it, it's still available for instant streaming on Netflix.

Extra Features:
As expected from a Criterion release there are some nice bonus features here.

Now to the film itself:

Harold (Bud Cort) is a quiet, pale faced, young man who is fascinated with death.  He is so fascinated that he stages fake suicide attempts, although we come to realize that these aren't meant to be real attempts so much as they are meant to be his way of rebelling against his mother.  His mother is so accustomed to these by now that she isn't scared by them, she is simply annoyed.  She tries to set up Harold with dates to see if she can break him of his unusual tendencies, and she even sends him to a therapist and forces him to spend time with his military uncle in the hopes that someone can talk some sense into him.  As anyone who has ever had an overbearing parent figure knows, you aren't just rebelling for the fun of it, and rebellion isn't so easy to break. 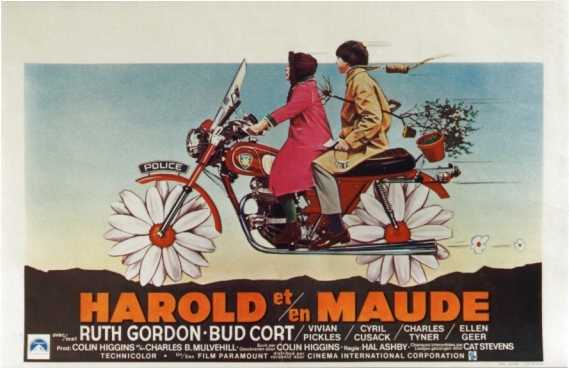 The film opens with a series of Harold's fake suicide attempts that are a bit of a disturbing image, but that's what he is going for, and yet his mother, of course, isn't impressed by his behavior.  Her reactions take the edge off these scenes in a somewhat humorous way, this is a comedy after all.  Harold's fascination with death doesn't end at faking his own death however, he enjoys attending funerals as well, even though he likely has never met the person who died.

This is where we meet Maude (Ruth Gordon).  She also has her interest in death, but for different reasons than Harold. She is a 79 year old free-spirit who also frequents funerals.  Eventually they realize that they both stand separate from everyone else and they are the only familiar faces that keep popping up at every funeral.  She is hard to miss, with her bright yellow umbrella and bright clothing she stands out in a group of dark umbrellas/clothing.  She eventually makes contact and that's when Harold's life changes.

It makes sense that Harold, being a young introvert, doesn't have the greatest perspective on life (most young people don't), whereas Maude is getting old and knows she doesn't have much time left, she is an extrovert who wants to go out and grab life and live it to the fullest. They meet because they have similar interests, but Maude, being the fun loving free-spirit she is, has such a different view of the world and life itself that she fascinates Harold.  Considering her age, she knows she is approaching death, which makes her maybe the only person who could connect with Harold, and we find out later that she has survived living through a concentration camp (she has numbers tattooed on her arm) which allows her to understand Harold's world view while at the same time understanding pain in ways that Harold can't possibly understand. Spending time with Maude is the best form of therapy Harold could get.  Yet she maintains such a positive outlook that she is a fascinating character, not just for Harold, but for us as we watch the film.

It's also interesting to note that Harold starts off very pale, but as we progress throughout the film, the more time he spends with Maude, his skin begins to darken and gain color as if to suggest that he is finally coming to life.  It's a nice touch that further's his character's development. 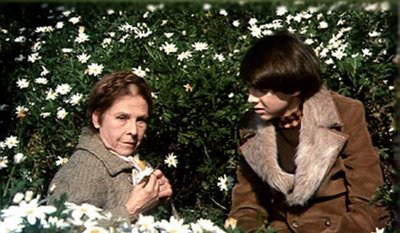 There is also some pretty strong anti-war sentiment in this film.  It came out during the Vietnam war and there is some strong imagery during one montage where Harold and Maude are sitting in a field of white flowers and it's all very pretty, but then there is a straight cut to them sitting in a cemetery surrounded by white grave stones, and as the camera zooms out we see just how many there are, it's a humbling image and furthers the anti-war sentiment.

The soundtrack to the film is made up entirely of Cat Steven's songs. Some of Steven's best work is present in the film.  Music is an important part of film, and Cat Steven's music not only fit well with the images on the screen, but become inseparable from the film itself.  As a matter of fact, I can't help but believe that this film would not work nearly as well if not for Cat Steven's contribution to the film.  His song If You Want To Sing Out became the theme song for the film, even sung by Maude in one humorous scene in which she begins playing the piano and singing, but as she walks away from the piano it continues to play on its own.  The song is most certainly Maude's personal theme song as well, and by the end of the film that has transferred over to Harold as well.

Hal Ashby is considered the "Quintessential 60's director," and this film has probably been about as influential as Mike Nichol's 1967 film The Graduate.  Stylistically it's clear that this film has been an influence on Wes Anderson.  In fact, if it weren't obvious that this film is from the 60's-70's, and you didn't realize who directed it, you might guess it was a Wes Anderson film. Anderson payed homage to this film, and its soundtrack, with the inclusion of 2 Cat Stevens' songs in his second feature film Rushmore (The Wind, and Here Comes My Baby) that also happened to be about a young man in love with an older woman (although not nearly as old as Maude).  Anderson also cast Bud Cort in a small role for his 2004 film The Life Aquatic with Steve Zissou.

Harold and Maude, although not successful when initially released, has become a much loved cult classic.  It has been called the "Quintessential 60's film" even though it was made and released in the early 70's, and perhaps that's why it didn't do that well when it was initially released.  Anyone who has seen a romantic comedy before is undoubtedly familiar with the formula of having an introvert who is in need of an extrovert to come along and break them out of their shell all while falling in love.  It's a familiar formula and yet Harold and Maude makes is different than any you have seen before.  We have to accept the idea that love knows no age, if you can't this film may not work for you, but if you can you may find one of the most interesting and entertaining romantic comedies you've ever seen.