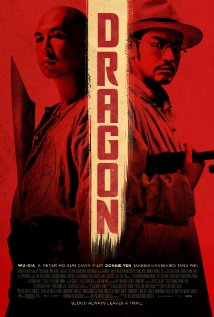 I think Dragon is still in it's theatrical run here in the states (although likely in a limited release), so you can go check it out if you get the chance.

First off I'll say that when I saw the names Donnie Yen, Takeshi Kaneshiro, and Peter Chan I was immediately on board to watch this film, even without having read the synopsis.  I really enjoyed Peter Chan's last film The Warlords which was made way back in 2007 so it's good to see another film from him. Donnie Yen on the other hand has been very busy these last few years, most notably as martial arts master Ip Man.  This is a fairly different sort of role for Donnie Yen and I think he gave a solid, and somewhat mysterious performance.

The beginning will remind some of the 2005 film A History of Violence, but the simple idea of a man trying to leave behind a violent past is nothing new to cinema or storytelling in general for that matter.

It starts with a pair of thugs holding up a local shop for money, but Liu Jin-xi (Donnie Yen) just so happens to find himself in the right place at the right time.  He attacks the attackers and eventually they die in what looks like their own doing, with Liu having just barely survived the encounter.  Soon after Xu Bai-jiu (Takeshi Kaneshiro) comes to town to investigate the incident. Most of the government officials are pleased to find out that the thugs were escaped criminals, and that Liu, having defeated them, has made their work easy, but Bai-jiu isn't convinced that, that's all there is to this story.

After a thorough investigation he walks us back through the events and we see things as they really happened. It's a very fascinating sequence in which we see the attack played out again, but this time with Bai-Jiu walking through the scene watching everything as if it's coming to him simply through his power of observation as an investigator. As with any good investigator, Bai-Jiu pretty much has this case solved from the beginning, but his trouble is coming up with the proper evidence in order to produce a warrant for the arrest of Liu, who in reality has a very dark past tied to a murderous group known as the 72 demons, who of course won't let Liu get away with leaving them.

Takeshi Kaneshiro shines in his role as the investigator, Bai-Jiu, who could also be part doctor (sound like Sherlock Holmes' faithful friend Watson anyone?).  His character refuses to feel empathy and values the law above all else. While Donnie Yen has some great action sequences in this film, this film is stolen by Takeshi Kaneshiro, and by the end of the film I only wished that his character would have gotten more attention.  The main bad guy, the master of the 72 demons (Yu Wang), is an intimidating presence and sadly does not get the screen time his character deserved.

My only real beef with this film:

In film we are watching our main character's journey, we watch for him/her to change or learn something significant. In this film, without spoiling anything, I have to say I really wish that the Bai-Jiu character were treated as the main character.  He is by far the most interesting character, and in all honesty Liu has already changed from the beginning, we are watching him try to move on with life after that change.  Bai-Jiu, on the other hand, has the most to learn and the decision to make in the end.  I know it's supposed to be both of them as the main character(S) but the film could possibly have been better with a little less of Liu and a little more of Bai-Jiu.  True enough they are all solid, well developed characters, and we do need to sympathize with Liu, but this film should have belonged to Bai-Jiu.

While this film, at times, had me scratching my head over what type of film I was watching, I must say I enjoyed it throughout.

If it hasn't come to your theater, or you've already missed your chance, you can rent it digitally through Google Play, or Amazon Instant Video for around $7.