Concerns for The Hobbit Trilogy 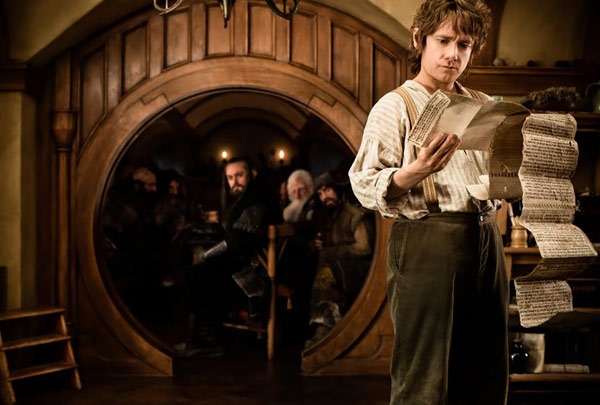 So we all remember the great Lord of the Rings trilogy, and we have all been excited by the chance to return to Tolkien's world with The Hobbit, and while I enjoyed An Unexpected Journey, I am afraid of where this is going.

With a large portion of the book being covered in the first film we can surely expect large amounts of filler and tie-ins to the earlier Rings films. I'm sure Jackson will pull his "filler" from the appendices and The Simarillion, but there is another problem that will affect this new Hobbit trilogy.  It may be that we can overlook it and enjoy these films for what they are, but it will still be present nonetheless.

It should be obvious, but (spoilers) Jackson has added scenes in an attempt to connect the Hobbit (as a prequel trilogy) with the Lord of the Rings. Here's the problem:  Tolkien wrote the Hobbit as a child's tale, it was fun and exciting without getting too dark and emotional.  Then, of course, came the Lord of the Rings, a much bigger tale, with much bigger stakes.  His world went from a group of dwarfs trying to take back their home (and gold) to a fellowship trying to destroy a ring of power that would eventually bring about the end of their world as they knew it.

As you might expect one story has higher stakes than the other, and of course the higher stakes come AFTER the lighter tale. Told in reverse (as the films are attempting) we must take on a significant drop in stakes. Unlike Tolkien, we know what happens in the Lord of the Rings while experiencing the Hobbit. That may be the biggest detriment to this series. It's a shame that it is this way, because had the films been produced in chronological order we wouldn't be having this discussion. We've seen Gandalf stand his ground and kill the Balrog, so I'm sorry fat troll (or any threat for that matter) I KNOW there is no way you are a threat to our friend the wizard.

Once we've seen them save the world, you ask what's next?  How can they top what's been done before? With a smaller tale?  The fact remains that a smaller tale just pales in comparison. You can't show us a long intense journey in which a group of beloved characters selflessly fight and work to save the world for the people they love, only to turn around and try to tell us another story about lesser characters trying to kill a dragon to retake their home. The stakes don't compare.

To make matters worse for these characters, Jackson is tying it in so that it is even more of a prequel than even Tolkien had thought.  It's interesting and I've been back and forth on whether I think it's a good idea to get too carried away with bridging that gap, but I fear it will only make these character's journey lesser and lesser.

We will inevitably watch as they go retake their home and kill Smaug (spoiler maybe, but do you really think they'll fail?), but it will be a shallow victory, and a bitter sweet celebration when they realize that Sauron has returned and an even bigger more important journey is coming.  The problem, again, is that their sense of accomplishment, and the joy in seeing the journey through to the end will be overshadowed by the fact that something much larger and darker has begun.  We'll be saying to ourselves, dark times are coming and the world will be plunged into a desperate fight to destroy an old evil, but if it's any consolation Smaug is dead and the dwarfs retook their homeland (but we won't see it at all in the following 3 Lord of the Rings films).

I'm not saying that The Hobbit is bad, in fact, I quite liked it, but as any film buff knows, stakes are important.  I think the nay-sayers are being a little overly harsh toward this film, but there are legitimate concerns as well.

Despite the lacking stakes when compared to the LOTR films, I'll say it's nice, at least, to have these newer films, and perhaps once the 6 films get re-released in a giant box set and we can watch them all in order we'll forget about this problem, but as for now, as we head to the theater, this trilogy will remind us that order matters.  It's more a fault of the filmmakers for starting where they started than anything else.  When we remember the bigger Lord of the Rings trilogy, we will sadly see the Hobbit as a lesser series of movies because stakes and a sense of urgency are absent, or at least pale in comparison to what has already been seen.
Posted by Zach Owens
Email ThisBlogThis!Share to TwitterShare to FacebookShare to Pinterest