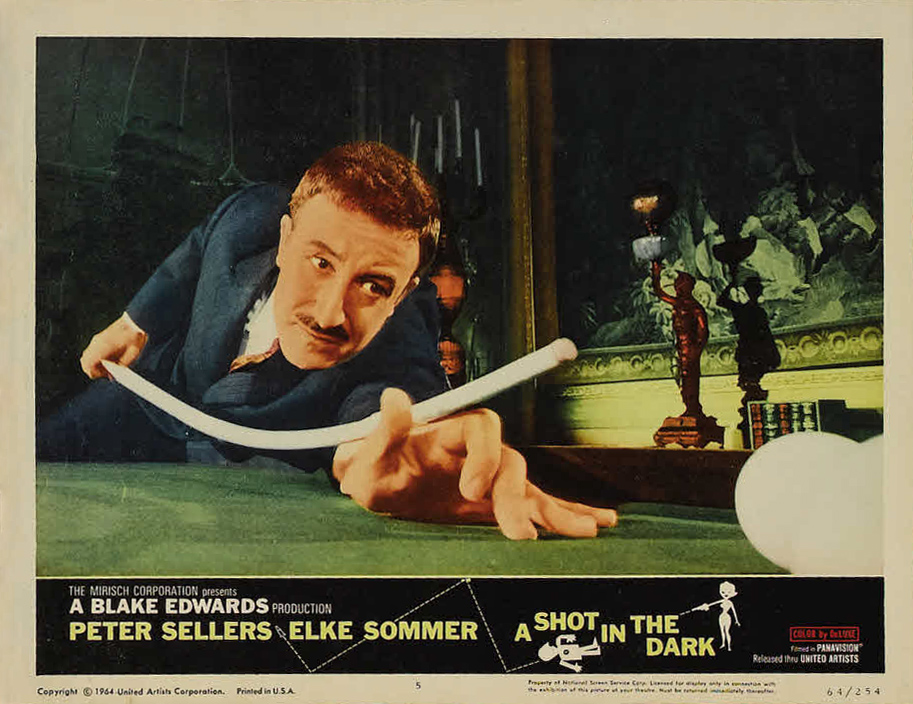 There are 7 Pink Panther movies available for instant streaming on Netflix, although this film, A Shot In The Dark, does not have Pink Panther in the title it is a film with Inspector Clouseau and features the recurring characters of the series (Dreyfus played by Herbert Lom, and Kato played by Burt Kwouk).

This film is one of the best in the series, and if you go by the star ratings on Netflix, it's the highest reviewed.  I still think my favorite of the Pink Panther films is The Pink Panther Strikes Again, which is also available on Netflix, but A Shot In The Dark runs it a fairly close second.

This who-dun-it begins with a spectacular bit of fun as the camera cranes around a large mansion as men and women sneak from room to room to meet up with someone else, all while managing to not be seen by anyone else.  From this sequence we already know that everyone living at the mansion is cheating on their significant other with someone else from the mansion.  At the end of the sequence we hear four gunshots and know someone has died, but who died and who did it?

Time to call in Inspector Clouseau.  The evidence seems to stack up against the maid Maria Gambrelli (Elke Sommer), but Clouseau has other ideas.  He believes she is innocent and hiding something, or could it be that he is simply too attracted to her and can't see that she is the killer?

Clouseau is training a new Inspector named Hercule in this film and, as you might expect, scenes involving Clouseau training anyone would be quite entertaining.  As in any film featuring the bumbling Inspector Clouseau there are many gags, and lots of slap-stick humor, but of course Peter Sellers, being the pro he is, pulls them off well.

If you're in the mood for a comedy give this a shot... in the dark (I guess that sounded funnier in my head).
Posted by Zach Owens
Email ThisBlogThis!Share to TwitterShare to FacebookShare to Pinterest