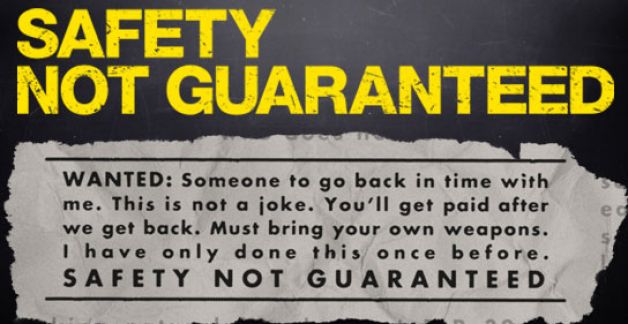 If I told you that this film is based on an add from Backwoods Home Magazine (1997) that said:


"WANTED: Someone to go back in time with me.  This is not a joke. You'll get paid after we get back. Must bring your own weapons. I have only done this once before. SAFETY NOT GUARANTEED."

You might think that's funny, but not really much of a jumping off point.  Well the add was nothing more than a joke, but this film wonders, what if it were real? 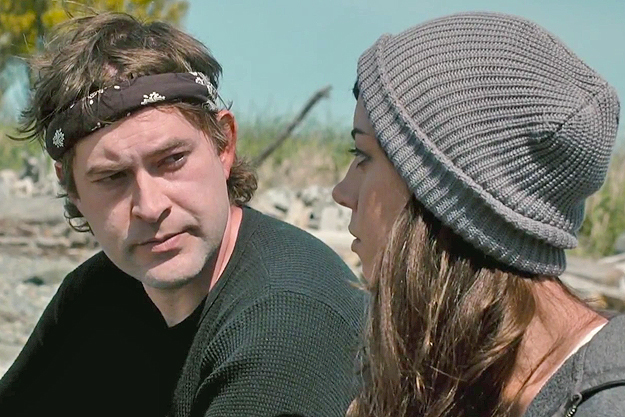 Kenneth (Mark Duplass) is the person who wrote the add in the film, and Darius (Aubrey Plaza), Jeff (Jake Johnson) and Arnau (Karan Soni) work for a magazine who is out to get his story and see whether it's real or not.  It doesn't take very long for them to realize that his add is no joke and he is sincere in his desire to travel back in time.  While Kenneth doesn't explain (and no one asks him) his supposed previous trip back in time ("I have only done this once before") we don't really care about that by the end of the film.

Usually time travel stories have lots of paradoxes to deal with but this film sidesteps them by treating time travel itself more of a macguffin rather than the main subject of the film.  Kenneth is strange, but not over the top.  Mark Duplass plays the character very sincere, and that makes him a likable character. This would be a tough character to play, as he could very easily have been over the top, but solid direction and acting make not just the character of Kenneth, but the other characters as well very interesting.  This being a bit of a comedy you might expect things to get out of hand, but the Director (Colin Trevorrow) and writer (Derek Connolly) develop the characters with care, and by the end we have a handful of deep, likable characters that you weren't expecting when you started the film.

From the beginning it's easy to spot the inevitable betrayal scene coming from a mile away.  This could have easily gone the route of "10 things I hate About You" or "Avatar" where the character that gets close to the outsider for insincere reasons eventually becomes sincere and then has to admit they were lying, but here that formula gets turned on it's head when we come to realize that the outsider is also not being completely honest.  There is still "that moment" where the truth comes out and the outsider has their feelings hurt, but the film is smart enough to not dwell on it and move on rather quickly.  This film keeps you guessing and the ending is satisfying while not wholly resolute.

While this film is technically a comedy it doesn't cross the line that so many other films do by going over the top.  The writing is strong, the directing is strong, the acting is solid and Ryan Miller's music is great.  It does a good job of channeling Mark Mothersbaugh (frequent Wes Anderson collaborator) and Jon Brion (specifically his music from "Eternal Sunshine of the Spotless Mind").

How can a fairly small indie film have sci-fi elements and special effects?  Well apart from one scene it doesn't have to.  The film isn't clear about whether or not time travel is possible or whether it actually happens or not, but it doesn't need to be.  This film is much more about the journey than the destination, and it's an enjoyable journey throughout.
Posted by Zach Owens
Email ThisBlogThis!Share to TwitterShare to FacebookShare to Pinterest