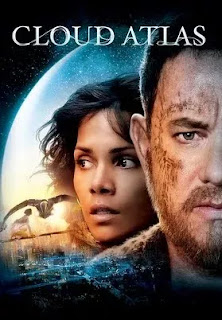 Be careful of your expectations.

I went in very impressed by the trailer, having not read the book, and expecting to see a complex film that I would need to see multiple times to really understand. While the second two things may have been true, I also felt as though expectations hurt my appreciation for the film, that is until I gave it some more thought later.

I kept expecting the film to come together, wrapping everything up nicely, putting it all together and explaining the connection between all the different stories happening and why every actor kept popping up in every other story line. The truth of the matter is that's not really the point, although to narrow it down to just one point would be impossible. While it's tempting to try to watch for connection and try to piece it all together, you might be better off saving that for another viewing. I found that while I was watching for those things the real movie was sneaking past me.

To be sure, this film tackles a lot of subject matter, so I think it's also easy to be confused because there's simply so much going on. I think it's important to understand a few things: The film is a collection of story lines ranging from 1849 to 2346 that, while different, all feature the same actors but in different roles (as different races and sometimes different genders). In each storyline the main character is different (identified by a unique birthmark shared by all main characters of each different story line). Confused yet?  Stay with me (if you've seen the film it'll all make sense).

The different story lines are all basically a struggle for freedom in which the main character either lives to see change take place or sacrifices their lives to facilitate the change.  Sadly some story lines are not as clear as others, but most people seem willing to overlook this. Each segment is essentially a rewritten version of the previous one (in a different time period) and it's interesting to see them transition back and forth between the different story lines by cutting from one actor in one time period to the same actor in another time period (playing a different person).

Where repeated viewings will help is in finding the similarities between the stories and the connections between them.  For instance the story featuring Jim Broadbent as Timothy Cavendish as the lead character, (the one set in 2012 if I'm not mistaken) has Timothy writing what will become a a film that influences characters in the story line from 2346.  You'll also notice that there is a journal being written by one character that turns up in a later time period, it's being read by Robert Frobisher (Ben Whishaw) until he realizes that it's been cut short; or the old man dreaming about the place in Neo Seoul with the waitresses.

While there are many ideas and such to discuss here, I can't go into all of that now, but it is interesting that the film shows that no matter how far we've come (or think we've come) there will always be people who have to fight for their freedom, in the past, present and future it has and always will be an issue and there will always be someone who will have to fight for it.  Those who have come before will influence those who come later.  There are lines of dialogue that are even in the trailer that say something along the lines of, Fear, Belief and Love are all phenomenon that determine the course of our lives, and they are forces that begin before we are born and continue after we die... the trailer continues to say that our lives are not our own and we are bound to others, past and present, and by each crime and every kindness we birth our future.  So it seems almost contradictory because it sounds like it's saying there is no free will and our lives are all predetermined for us, and yet the last line seems to suggest that there two little things called chance and choice that have an affect on our lives as well.  The trailer also has a line about how there is a natural order to the world and that things don't go well for those who try to step outside of that order, but this is one of the main themes.  We saw a similar theme from the Wachowski's Matrix trilogy, it was the idea that we are under control somehow, but someone has to break out of control stepping outside of the so called "natural order" and when they do they will change the world.  We also sort of get the sense that the Wachowski's are still sort of enamored with the idea of "the one." In the Matrix there was only one character in the film who had the power to change things, but in Cloud Atlas there are many story lines going at once so there are multiple "ones," although one per story line identified by the unique birthmark.

Both the Matrix and Cloud Atlas share the theme of fighting for freedom in some way shape or form. It's clear that this is a significant theme for the film, as well as for the Wachowski's as filmmakers, and yet I know understanding this only scratches the surface of Cloud Atlas.