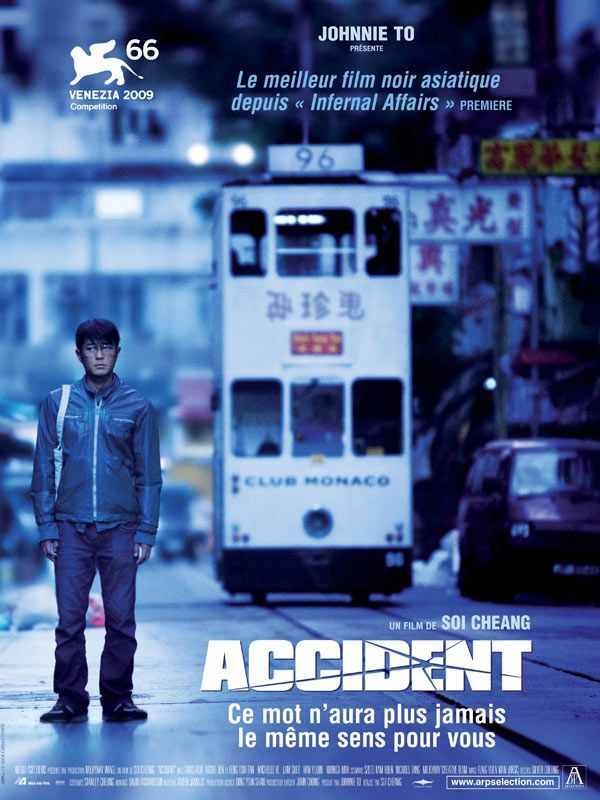 Do yourself a favor and find the 2009 Hong Kong film "Accident." It is currently available on Netflix Instant, so watch it then return to this post for some reactions.

I'ts hard to talk about Accident without giving away the ending, and this is the sort of movie that just won't be the same if you know the ending.  In any case it's worth it to watch the film first.

The film starts with flashback of a car accident in which the main character, Brain's, wife dies, and then we flash forward to see another accident in which a man dies from having large shards of glass having fallen on him.  We eventually realize that this "accident" was not really an accident and that Brain and his team were targeting the man.  They are hitmen who specialize in performing murders made to look like accidents.  It's interesting that the main character is called Brain because he is the "brains" of the plans, and doesn't want anyone to know his true identity.  This is a man who will go as far as to avoid owning an Octopus card, and pays for the bus with coins he won't touch with his bare hands. To say he is careful would be an understatement.  He takes several types of transportation just to get home to be sure he wasn't followed.  He has mirrors set up in his apartment so that no matter where he is he can see into the other rooms to make sure no one is waiting there for him.


When a series of accidents befall him and his team he is convinced there is another team out to get him.  The rest of the film is his attempt to discover who is after him and put a stop to it before he himself becomes a victim of an "accident."

It's a very atmospheric film with rain soaked scenes and locations we aren't really that used to seeing in Hong Kong on film (at least here in the states).  It is a rare treat to see this part of Hong Kong. We are accustomed to seeing the big business areas that are often photographed  but here we aren't seeing the more glamorous locations.  It is a beautiful city (whether we are seeing the more glamorous side or not) and it's nice to see more of it. 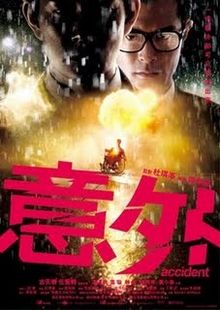 While "Accident" doesn't initially appear so, it is in a nutshell a character study.  It's clever enough to keep it a secret allowing the audience to see the situation the way the main character sees it.  We go along with it and try to figure out the mystery along with Brain, but in the end we realize that he made a big mistake.  Brain wasn't simply a cautious person he was suffering from paranoia.  Perhaps it started as a cautious nature, but it eventually turned into paranoia.

Thinking about this film, I'm reminded of Humphrey Bogart's character in Treasure of the Sierra Madre.  We watch as Fred C. Dobbs slowly loses himself to paranoia even turning on his friends because he can't even bring himself to trust them.

While Louis Koo's character, Brain, is far more subtle, his experience is not unlike that of Dobbs.  The difference is that instead of losing gold, Brain fears that a slip would cost him his life.

I mentioned that the character is called "Brain" because he is the mastermind behind the plans, but it should be our first hint that the character is too much in his head and something is not right.  His paranoid condition is allowed to grow because of his meticulous, superstitious nature and what turns out to be nothing more than coincidence.  Brain doesn't believe in coincidence though, or accidents for that matter.  Knowing their previous target was a triad boss, and that there are likely other groups who perform hits in a similar fashion, it's easy for the Brain to let his fears get the better of him.  To the filmmaker's credit we go along with it and believe it right along with Brain until it's too late to take back what he's done.

The film is beautifully shot and features many well edited sequences, none better than the final moment of realization.

I read a review from an IMDB user named Dick Steele who hit the nail right on the head when speaking about the ending:

"I thought that it played into the themes of Chance, Fate and Karma all rolled into one perfectly shot and designed sequence, that had me at the edge of my seat and wondering how it would all finally play out. And when the answer is so starkly simple, you're left to ponder that you too have already become what Brain symbolized – you have thought too much, and share in the same level of reluctance to believe in anything other than the situation having to be something overly engineered."

It's a fine line you walk with an ending like this.  It can either fail to be believable or it can be something too obvious so it fails to surprise the audience, but this film works. It is well done enough to keep the audience guessing and we only see the events from Brain's perspective so it's easy to fall for it the way Brain did.  Upon repeated viewings we will easily be able to watch those scenes and we will see where Brain's misconceptions started and we will better understand the circumstances that caused his paranoia.
Posted by Zach Owens
Email ThisBlogThis!Share to TwitterShare to FacebookShare to Pinterest